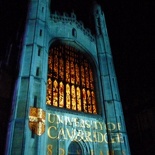 What other cooler way to mark the end of the university’s 800th anniversary celebration with a cool and ambient lightshow held at night with fire art performances? Apparently, the whole stretch along Cambridge King’s parade street was closed for much of the night’s last week for the event, consisting mostly of laser and light shows. The crowds are evident as well- with the roads packed and queues to the event snaking out onto the streets.

People passing by during the evening will be delighted with much of a treat- Lasers and life performances by the Fire Troupe, consisting of fire breathers and eaters. There was much to see. You will be greeted at entrance to the event with a splash of animation projected onto the senate house. The white walls of the house made an ideal projection surface for the myriad of lively and brightly animated features seemingly “painted” onto it’s walls.

It’s no other painting either, each animation segment is uniquely different and animated to tell a story about the university’s rich history, intentions and foundlings of the university as a global world leader in education with an alumni of 85 Nobel Laureates. Notable figures shown will also include Issac Newton & Charles Darwin. 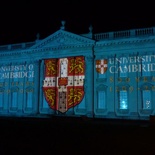 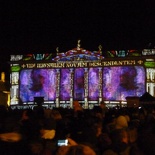 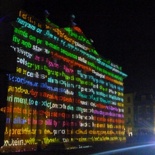 The event saw a tour around the King’s college grounds, demarcated by thin green electro-luminescent strips lining the path taking us towards the college chapel and along the river Cambridge. There, another set of animated projections were displayed on the chapel and adjacent building walls. Ambient sounds were played throughout the tour path, giving the area a rather upbeat feel despite the dark eerie setting required for the projections to be effective. The place was packed almost bumper to bumper, as remarked by some: “This is the amount of traffic King’s will get the whole year in one day!”. The tour ends with a globe laser display at the green towards the gate exits, painting the global outreach Cambridge have in education as well as constantly echoing the slogan “transforming tomorrow”. 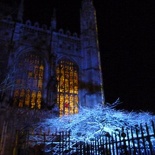 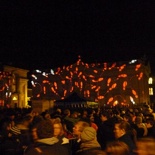 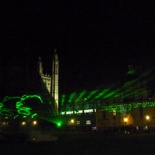 The lasers at the end

The show was great, but otherwise not really much an eye opener. However, it actually gave me a chance to tour and see King’s college in the night- something I’ve not had the opportunity to do so. “Apparently it’s the same as what they did for the opening ceremony last year as well” as exclaimed my seniors. Nonetheless, everything was rather new for me and I guess something worth-wide to mark the end of 800th years of achievement. I don’t think we may be seeing another celebration as big as this, well for a long time to come.