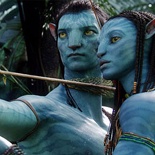 Caught Avatar 3D yesterday afternoon at the Vue Cinema in Grafton shopping center. Yes I know it’s been a month since it was released and everyone had already watched it, let be some even 2 to 3 times, so this rant is not new. But I had not really been watching movies very often these days, let be even only major ones over the yesteryear. But when I saw the trailer to the show last year I told myself that it’s a show I will definitely have to watch.

And I did, and was blown away by the show. At the end of the show. I was lost for words, far beyond thinking ages since I’ve left a theater after a show feeling so captured, so memorized- I was torn beyond words to even describe how good the show was. Let be even forget about the high ticket price (despite it already heavily discounted at £6.95) I paid to watch the show in 3D. The experience the show provided was even worth more than the price. It was a show which I left the theater still overwhelmed, it’s just that fantastic.

One thing I like about adventure, sci-fi shows is that it immerses the viewer into a whole unique world given it’s rather bizarre ecosystem, told over a brilliant storyline and fantastic soundtrack (which I can’t stop listenng now) which amazes audiences at every corner of the planet Pandora. Well though as saying goes, sex sells, but I think the skimpy sexy Na’vis are just part of the main attraction in the show. 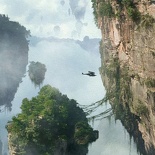 The show also blends in the world of nature, science and technology as an insight to a world as envisioned by James Cameron himself. All brought to life true a new frontier and setting a new benchmark for 3D and animated CG films (including human motion tracking film) since Final Fantasy, the spirits within wowed us almost a decade ago. And you need not to be an animator to enjoy the film by the polygon!

Avatar, though only 4 years in the making (since 2005) the story was actually written in 1995 over a period of 3 weeks, after James was done with the Titanic. It was set for a 1999 release, but CG and film technology was not mature enough to make the film as he envisioned it to be, until now. James is not done with Pandora just yet- A sequel is confirmed by himself and it’s rumored that the sequels could look at the interior of Pandora, possiblity introducing us more of the ecosystem as well as Pandora’s marine life. Apparently James Cameron has a whole underwater landscape mapped out. Sam Worthington (Jake Sully) and Zoe Saldana (Neytiri) have signed for a trilogy. With rumors of the return of RDA’s Parker Selfridge (Giovanni Ribisi) and Secops’s Quaritch (Stephen Lang).

“Avatar” earned it’s place in the record books as the most successful and highest grossing Sci-Fi movie in history, I won’t be surprised if this show gets an award this year for Best picture and I believe they will, deservingly. For me, this masterpiece will get definitely get a place in my video collection when it releases on Blu-ray or DVD.