And so 2009 comes to end with 2010 already here. I was in London to formally welcome 2010 with a group of friends, technically it’s one of the few major cities where the countdown is telecasted worldwide (besides Tokyo, LA, etc) and man was it a bashingly crowded. You will be greeted with a human wall crowd upon popping out of the underground, with bumper to bumper snaking queues from the embankment all the way to temple and black friars. Notably all the stores selling alcohol have ultra long queues sticking out of them.

With booze and gear loaded, we started making our way towards the embankment, only to see many of the viewing areas near the London eye already full and blocked. We then started making ourselves towards St-Pauls and Temple where we are able to get a distant view of the Eye and fireworks from afar. 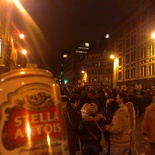 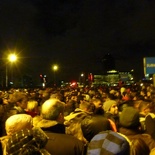 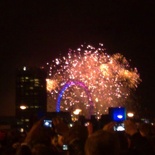 Looking at the crowds, it will definitely be something not for the Agoraphobic- not that was a problem but it can get really cramped and fast moving in some areas where everyone tries to get a good vantage point to view the impending fireworks. The atmosphere made up for it, there were cheers everyone, laugher and greetings everywhere. Immediately after the midnight countdown and the fireworks, it suddenly snowed for awhile. Painting the orange lit streets a hue of soft white, as if the heavens where celebrating in unison with us too.

The trains and buses after midnight were all free to use throughout the whole morning as well, a great incentive for travelling back with the exception of the crowds at the stations, which was well controlled and managed. This was nice, I mean like wow, what is the possibility of free rides in Singapore after any countdown? We would even count ourselves fortunate if they even bother to operate to late, let be charged exorbitant fares for it, contrary to providing free fares- something near to impossible. Maybe that is why London is still such a world class city.

So technically, what’s the first thing I did on for the year? It seems that getting drunk on the streets on London is not too of a bad start I guess. Somehow we all managed to get home safely through the crowds in one piece, met a few crazy crowds on the way who offer real cool party hats as well as drinks and chats by the street with the exception of some others in my group really drunk from all the liquor that kept them real busy at the sink back in our apartment for awhile.