The engineering prep course was held over the course of last week, it was organised by the university department as an introductory course for all fresher engineers starting their first year in Cambridge university. There were talks on various engineering topics such as reducing airplane noise and introductory electronics by various speakers and industry partners, such as ARM, BP, etc. The highlight of the course for most students, would be having to get onto building and programming a robot to play soccer autonomously after an hour lecture on robotics. The robot was to be built using parts from the Lego Mindstorms set, something I was familiar with having owned a set myself back at home, only that the one used by the university is a new version (1.5) with the USB infrared tower (mines the version 1.0 serial tower) and they have quite an array of third party sensors to use, such as Infra-red sensors! 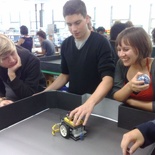 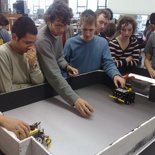 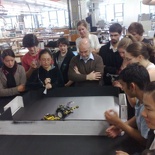 I guess to anybody, to build a robot from virtually zero knowledge in 2 days was quite a bit of a feat. We were split into 12 teams which were formed during the ice-breaker dinner sessions on the first day of the prep course. I was rather niffy with building robots out of Lego, so I offered to design and build the robot based on the team’s requirements. In the end we settled for a single IR sensor with 2 pairs of touch and light sensors, all that’s left was programming which were delegated to the rest of the team of 6 to plan and code. Programming turned out to be rather more of a feat than we thought, but we did turn out with a working robot which actually looked rather cool.

The matches are hilarious, some team’s robots were just moving around blindly bumping into walls while some are just sitting stoned while the teams cheered on the “tortoises” to play soccer. We didn’t win in the end through the process of elimination where one team gets some small prizes, but I guess the new friendships made and the experience gained was more invaluable than anything.

Term will actually start next week, there are much to get around and registering with the engineering department next week. It will be busy!