Motivational signs are always well… motivational- stuff you usually see lining cubicle walls or classrooms. On the other end of the spectrum, particularly if you use them in another unintended way, come the kind of signs we call de-motivational signs. Coupled with a sense of humor these signs can get rather hilarious, especially when you try to get about a serious message without trying to breaking yourself from laughing bursting uncontrollably.

Nevertheless whatever the purpose, in the game of team fortress these signs are always quite a hit, not to mention great distraction tools as well as anyone who pass by them will pop by them for a read. For this series, lets commemorate steam rolls and team stacking. To save them, just click on them for the fulled sized image, then R-click save image and import them into your game on the multiplayer options menu. 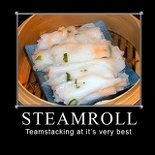 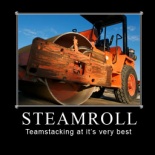 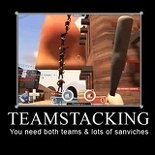 You can either love or hate steamrolling, nevertheless it’s a merciless culling of the other weaker team by another more power “stacked” team. Often with rather hilarious outcomes to both teams as well usually with no offense to anybody- There was once on a public server where the losing team all simply went spy crab and yes, many endangered crabs were lost in the process as well.