Home Blog There is not much of time left, or it is? 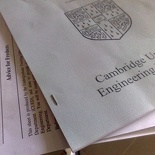 Well it really had been sometime since I’ve posted an entry here. Haha to the extent of some of my regular readers contacting me about my absence. Haha yes of course I am still around, my apologies.

So what had been keeping me busy? well much, it’s only 4 months before my school term starts in October. And there is still a HECK lot to do, but most of them won’t come in the full force until August. Where things like visa, medical checkups, chest X-rays, etc can only be settled. My college had sent me a set of prep stuff, such as things to read up on currently what I see installed are stuff on Further maths, which really got the gears in my head creaking again. Other than that, there’s other niffy stuff such as C++ and engineering drawing, yay! The bad is that I might be tested on this by my director of studies once I arrive on campus… JANG JANG JANG! Crap, I should have attended those advanced math prep courses my lecturer recommended me in SP. Time to load my cart on Amazon for those programming and math textbooks/bibles pretty soon.

Whats more, I’ve busted my leg, so you won’t see me running wayyy so often now, as instructed by my doctor as well (yes alot had happened right). To make matters worst, I have reservist to do this month as well. Just- yayyy! It’s my first but it’s an ultra low key one, just great. And when I though that’s over, crap I have Manning to do few months down the road over the NDP period as well, oh bummer. In a nutshell, it is come back to Singapore for chores and serve, then head back overseas again.

Oh well, at least when the country is happily enjoying the NDP you know that you all will be safe not only from terrorists but long range ballistic nuclear missiles, flu viruses, crooked bridges, curry bashings or raining cows as well, as I will be DA PROTECTORZ of de mutherland! (no offense) wahahaha, waa-hahahaha! *lightning strikes in background*.

For this period as well, I won’t be accepting any more new freelance projects, not only I do not have time for them, but as I still have a waiting list from my returning customers to clear for now (dang it’s just hard to turn down returning customers). So sorry if I do not reply in timely fashion your enquires about this or that.

Saving the best for last, one of the other reasons why I am away (which I guess you all will like) is that I’ve been working on the revised version of the site. The reason why I am taking so long are the various testing I had to do on localhost over various browsers before I port the new design online, so as to minimize downtime on the site as well. Much of the content around the site such as the about section will be updated as well, as they are quite irrelevant now. The code is more of less finalized and I am just wrapping up the codes for my custom plugins on wordpress.