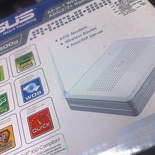 Got a new ASUS WL-600Gg wireless gateway DSL router today at Sim Lim to replace my old 2wire 1800HG which went “kaput yesterday” after a good old 4-5 years I say. Looking around, I am surprised at how low the prices of networking equipment now. Back before 2000 I remembered paying a premium for home networking equipment. That was before wireless networks became mainstream, so wireless equipment were only available at a premium price- the equivalent price of high end wireless-N routers now.

For me, wireless-N is currently more of a market gimmick, a gimmick I see many of us won’t be fully ultilizing considering that even most conventional regular broadband speeds (let be DSL) in Singapore do not even break a sweat out out regular-G wireless. A basic home gateway with an in-built DSL modem, wireless-G+wired 4 port router and firewall will only set you back a descent $80 now. I remembered paying about $150 for just an ADSL router and $170 for a basic Linksys 4-port wired router almost 5 years ago. Man do prices fall fast!

I got my Asus-WL 600G with a high-gain antenna after a haggle to $129, the device is largely an all-in-one device- ADSL modem, 4 port wired and wireless-G router, with the usual bits such as DCHP, firewall, traffic/gaming bandwidth prioritization, web GUI etc. The main selling point of this baby is the VOIP capability, media streaming features as well as an in-built USB print server (no multifunction printer support though), FTP server, NAS with external USB drives and Webcamera function with a hack to the Linux Kernel. Since it runs on Linux, it will be possible to find a port for SANE to allow network scanning, let be run a bit-torrent server to save direct to the NAS. If I were to say, get all these in bits years ago, it would have costed easily a $600+ bundle, though it won’t exactly be fair to say so considering relative improvements in manufacturing capabilities and components over the years, not to mention competition.

Setting up out of the box was a breeze, unlike ISP provided hardware with pre-configurations (who needs those anyway), the Web GUI were all intuitive and assessable, I was able to set up my DSL login, password, as well as my home SSID and encryption keys within 10 minutes and I next I was uploading some photos and here typing this post.

The main let down of this product I see will be the power adapter, which I could see, be the first thing I will see which will fail in the years to come. The power adapter looks cheap is really very different in contrast to the excellent built and quality from the main router unit itself. Presumably this one is sourced by the importer here in Singapore who have to include the adapters locally in the sets due to regional requirements. It’s just irritating that manufacturers put so much technology into their systems, only to let them be fueled by incompetent technology.

Other than that, I am loving my new router!