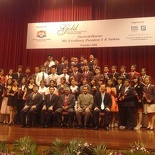 Today is the award ceremony for the NYAA Gold held at ITE College East. The NYAA is a DIY award comprising of 5 main areas, namely Service to the community, Skills, Physical Creation, Adventurous journey and Residential project. Each participant have to complete all areas within a minimum time span of 1 1/2 to 2 years, which will see them through many interesting areas of personal exploration and contribution to the community directly or indirectly as a whole.

The venue is rather spankingly nice, with an infrastructure and built even exceeding few Polytechnics we have here in Singapore. The guest of honor for the ceremony is his excellency himself, President S R Nathan who gave the award to each and every of the recipients at the event. Mr Mah Bow Tan sent his regards for not being able to attend the event, MP Mr Zainudin Nordin was present on stage to congratulate the winners at the event as well.

Every year, Singapore Polytechnic is always one of the largest groups receiving the award, at it’s peak as told by GAHA members comprising of half the number of the total number of recipients once (which all makes up of youths from all the Universities, Polytechnics, JCs, ITEs, universities & private colleges in Singapore).

There was an introductory percussion performance by the ITE college east students followed by the presentation. The master of ceremony Mr William Xavier radio personality from 938 was rather interesting, though blunt at times, but did a good job in keeping the audience entertained throughout the event. A tea reception followed after the group photo taking and as usual, the media, Channel News Asia were there as well. Sadly, the president did not stayed long enough after the event to mingle and interact with the awardees, as many including myself were all looking forward into meeting him at the reception itself. 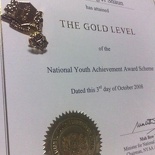 Looking back, I took about 3 years to complete all the criteria of the award- since I entered polytechnic in year one and completing it just after graduation. The idea of a minimum time frame is as an average person will usually take 2 years or longer to realistically put a new skill or habit in place and beyond. The idea of an award being largely DIY not only offers flexibility but ones which allows the participant to practice perseverance, responsibility and discipline as well- a hidden requirement which is still ultimately a necessity to achieve and complete the award as a whole.

The award is also a catalyst for service after the Gold. Personally, the introduction to the Gold Award Holders Alumni or GAHA for short was an eye opener to many and simply paints the fact that your contribution to the society do not just stop after receiving the award. There will also be many opportunities and events lined-up by the community and ever changing calender, such as high key events like the F1, ASEAN, YOG etc… as well as community services and environmental missions (such as studying whale sharks). The best thing about it is that it is not an “exclusive club” and anyone who wishes to help in the selfless service to the community area all warmly welcomed in their contributions, very much going with the saying “selfless service to all”.

I will see myself helping out in many areas such as fund raising, the whale shark scuba expedition as well as videography and web design, areas I am capable in helping out effectively.