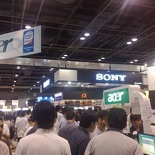 Was around comex on Friday mid-afternoon. I think visiting during office hours may be the best time to check out the deals, especially before the weekend rush. Technically, we can say that is the last of the IT shows we can expect this year, with PC and the IT show 2008 over for this year already. The place was packed but largely only around the entrances where all the flyer distributors are clogging up the entrances, the 4th floor is crowded, but still allows traffic flow with the 4m wide walkways. Everything is much clearer on the 6th floor.

There were not many good deals, NEC, HP/Compaq, let be Fujitsu and Sony do not even have any deals which can raise any eyebrows. If I do not miss much after walking around, I think much of the specials for this year’s fair will largely be peripherals. I think a good buy there will have to be few Logitech products Mclogic were having on sale, to my surprise, the $129 Logitech VX revolution mouse selling at $59 was sold out right at day one. There was no stock for the whole show period when I was there on Friday. Singnet is the only one in the house giving free laptops with their broadband plans while Starhub’s offers are simply plain to none.

Being largely a consumer fair, there wasn’t anything for corporate users, let be managed networking products on sale which I was looking for. I was scouting around for a new managed switch, but seems that Linksys is the closest you can get to Cisco in the fair. 3Com only had gigabit switches the most. Nevertheless got some contacts from few stores who have their shops back at Simlim, I guess it goes to say with the exception of only very few very good bargains, the line of IT shows in Singapore is just a no mere “get together” for vendors, let be part time students looking to distribute flyers and earn a quick buck here or two. Why people always have the impression that IT show deals are cheaper? it’s not at all!