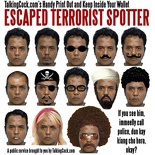 With Mas Selamat all round the paper’s these days with the 1 million bounty on his head now, that may at least get some fingers working. Looking at the papers today, the $1M is kinda negligible to the ones on Osama’s head, not to mention those on his right hand personnel. Nevertheless, it beats to puny few thousand reward previously posted by the Singapore police, not to mention with the possible new barrage of calls giving this now.

On 999 calls, I happened to meet and caught up with an old friend recently who is now serving his active national service in the police force. Just as how nominal I find army stories, I’ve always have a keen ear about the real experiences our men and women in the force have to deal with everyday, let be the civil defense. Not to mention just as how chilling some stories I heard from an ex-secondary school of mine who handles accident calls (we get 7-10 fatalities on our roads daily). This particular friend mans the reporting and messaging of 999 calls from the operators, with some rather interesting stories and experiences.

Though I’ve never and never wish to have the need to call 999. He told me of how some Singaporeans can call the 999 line just as often like they are calling for Pizza, not counting “returning customers”. Complaining over simple matters like low tap water pressure to sounds of mating cats, to remote control airplanes flying into their gardens- In other words, anything you can complain of under the sun.

He told me that people usually have the impression that they have to make taxpayer’s money worth by bugging the police time and again, but the callers seldom put themselves in the police’s shoes on how actually can the problem be solved practically. Say for instance the mating cats, they are not going to sit there and watch them throughout the night right?

Funny Mas Selamat tip-offs
Given that, if you were to ask any police personnel about their experiences with the Mas Selamat followups, I believe each and every one of them have their own head-shakingly unique and funny stories to tell, which can be rather assumingly funny too, here’s some I was told for the record:

People called 999 on Mas Selamat because:

No matter how dumb these reason are, the thing is that every call will be investigated, so it will be a great wasteful drain on the force which have their opportunity costs. So next time, do give the people on the force a thought before calling.