Update: The iPhone is said to be out on August 22nd 2008. This is confirmed with newspaper reports on the Straits Times. 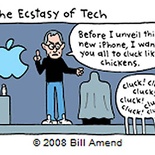 Just as September is brining Singtel how on the heels with the first Formula one night race, looks like we are seeing a trend here here the release of the iPhone on your sunny shores (and India) in September as well. Yes you heard it right Singapore, September is the month to get it officially and legally through SingTel.

There are rumors that an estimated ten thousand iPhones will be imported into Singapore for the deal, and there may be a change with Apple’s tight policy of monopolizing only on selected carrers, so as told by Apple’s chief operating officer Tim Cook- Speaking at the Goldman Sachs Investment Symposium on the iPhone not being beholden to the one-carrier strategy used so far, even if it makes the most sense from a business standpoint. More freedom to Mac lovers?

Cook made the observation when asked why Apple hadn’t seen fit to offer either an unlocked version or multi-carrier offerings from the outset, noting that the particular conditions of the US and the initial launch made it impractical to try and satisfy every carrier and user. For Americans, Apple would have had to release at least two iPhones — one for CDMA networks and one for GSM — potentially making the learning process overly complex for the public. This model could change over time, he says, but the ultimate plan is to provide the best possible experience early on. The existing tie-in with AT&T gave Apple a large amount of coverage while allowing both companies to be themselves, and a simple experience for first-time users.

“We’re not married to any business model,” Cook explained. “What we’re married to is shipping the best phones in the world.”

He added that for some areas to get the iPhone, it might be necessary to drop even staple features of most cellphone services. Some areas rarely if ever offer post-pay (subscription) cellphone service, for example, which would require a setup process devoted solely to prepaid options. This isn’t a sign of things Apple will or won’t do in the market, Cook warned investors. The officer also reiterated that there would always be a certain level of hacking no matter how widespread the phone might be, if simply because the demand exists. When users outside of official areas are “stepping over each other” to import iPhones, that indicates significant potential, he said.

The Apple senior staffer also noted that the iPhone’s price cut to $399 during the holidays wasn’t just a reaction to customers who thought the device was too expensive. It helped build momentum and a user base for the upcoming SDK, which he said would let programmers “only be limited by [their] imagination.”

Beyond the iPhone, Cook acknowledged but downplayed concerns that the market for digital music players was oversaturated and cooling off. In a rare admission, the COO admitted that sales for the iPod shuffle had lagged by 17 percent worldwide during the holidays and was the key factor behind new price cuts that should help rekindle sales.

There was also likely some cannibalization of iPhone sales by the iPod touch, but the iPod sold well and needed to be out in the market to set the groundwork for the Wi-Fi mobile platform it represents, he said. However, Cook reassured investors and analysts at the Goldman Sachs event by characterizing the iPhone as the company’s greatest chance at success to date. Apple is still on track to sell 10 million iPhones in 2008, he said — a statement that sent the company’s share price up over 3 percent in after-hours trading.

The iPhone is already an “incredible accomplishment,” he said, but has far more potential in the long term. “I need a word bigger than ‘enormous’ to describe it.”

Given that, there may be a degree of variation from country to country, so don’t be expecting the iPhone 3G to be available to M1 or Starhub telcos as of yet, it’s so far exclusive to Singtel and possibility with the phone locked to ST networks just like how AT&T had been doing it. A first to Singapore as for now? With that, there is no official word whether the phone will be available in Singapore unlocked for other telcos, though Singtel is the only official carrier to sell and distribute the phone here as of now. Its widely expected that by the time it gets out here, the iPhone will be a revised version, presumably utilizing the new 3G chipset to keep up with the competition and local network speeds here in Asia.

So Singaporeans do what you always do your country proud for, its a national sport! Start queuing up (and setting up camp) for the iPhone 3G at the Singtel comm center now!