Home Blog University Back to school, probablity-MIT up significantly! 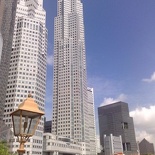 I was around back at school today after a short corporate meeting in the morning. There I managed to bump in a short one hour of gyming back at campus with my new alumni card before getting more work done in the day.

Alumni what card?
There, I was told by the gym auntie in-charge there that the alumni card I’ve got for this year’s batch is very different from the older cards issued previously- much lower in quality. This was so as I come to know after showing her how cheap and flimsy the cardboard-like laminated card I got in the mail last week (which is now peeling off at all the edges), even the photograph appears white-washed. My card which arrived in the “credit card” style holder in the letter already have it’s laminated coating damaged by simply removing it from the delivery holder, it’s that bad. For a lifetime membership thing, this card can’t even last 3 days!

New gym machines!
On a side note, the gym recently got a bump of new machines, such as a doubled number of treadmills to eight as well as the introduction of few new elliptical trainers as well as a new free weights and barbell training area, which sadly is always a hogging ground for dragon boat members. All these new additions are of course courtesy of the now dysfunct gym back at the old T14 block.

University university university
Our principal, Mr Tan was around on a tour with a few accompanying heads and directors to check out the new SP gym as well, thats where I got to chance upon him and we chatted for a while with regards to my application to the universities I am gunning for. He reassured me that I won’t go wrong and will have no problems entering the Imperial College, having not only studied there himself but also with the strong ties SP has with Imperial itself. He added that it will be a better choice as a technical college for engineering and research than Cambridge (which is ironically also one of the few Colleges I am gunning for in UK itself). He added that he will also be present at my scholarship prize presentation ceremony next week to witness all the selected SP students receiving the award as well.

Having done training, thereafter I was very much around my usual work W1115 area as a mentor helping out my juniors and undertaking project group members on some technical and software aspects of my gaming motion simulator (which they will be seeing through in their final year project). Few members were there to share their problems about group and management conflicts when forming their “ideal” teams, which I always emphasized is a very critical aspect for a team to be successful through their FYP and I was glad to be much of help in solving and giving advices which set them very much back in pace.

I did a fair bit of reflection thereafter with regards to my university choices, I mean I want to spend a significant amount of time doing research and development after I graduate, as I always want to bring something new and groundbreaking to the world, like the new age of you know!. That too, of course meaning having to do my PhD in the process as well. So the 4 year masters course in Imperial and Cambridge will be the most logical choice for a “fast track”.

I can’t deny that studying in US will be a very enjoyable experience too, with them being the preferred choice for engineering, but I felt I needed a more firm decision of choice myself rather than “going with the flow” or being so flicker minded- having never seen myself so open with so many choices at this crossroads period before. Later do I know that I got a tip off from one of my contacts who knew one of the Engineering Deans from MIT and they are interested in having us meet, whoa MIT, this will be very exciting!