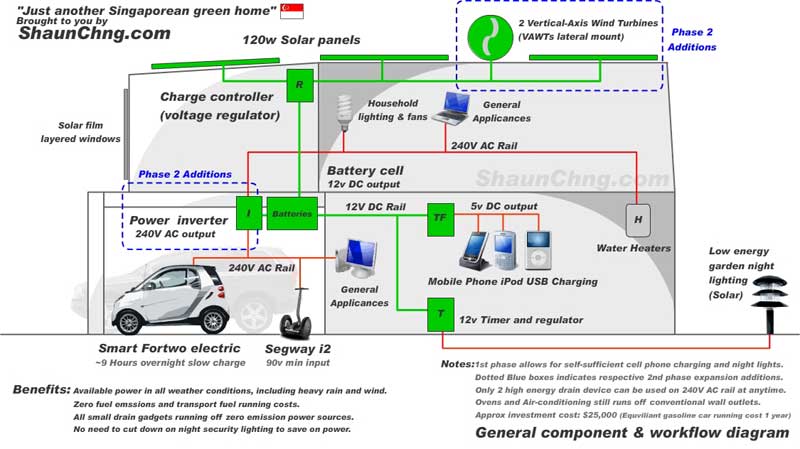 I had few ideas of a technically possible self-sufficient green home, only that I didn’t put much of it to work till the recent recent increase in oil prices which resulted in a corresponding increase in goods and service, utility bills, not to mention paying for gasoline for your car. As a picture speak more than words, here’s a simple schematic of my plans: 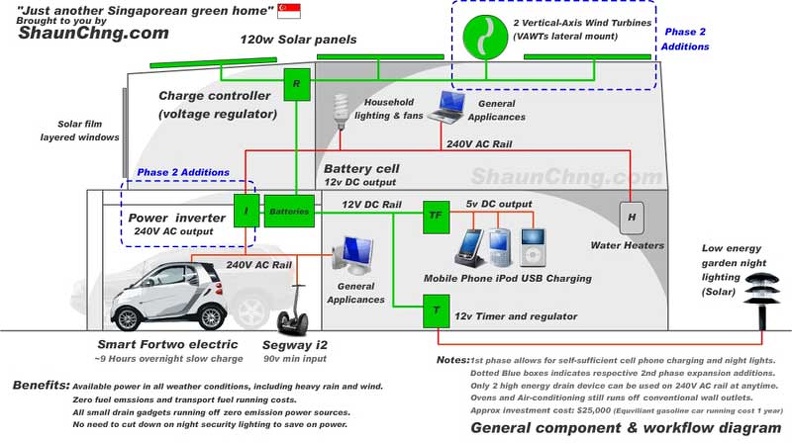 Just like how Volkswagen came out with the W16 engine which took life in a Bugatti, this home is a showcase and challenge to be able to realize my dream of a self-sufficient home completely running renewable energy with zero dependence on wall outlets for electricity. I’ve seen such houses in Sweden before, with home idle currents and water usage the only costs factoring into the utility bills.

Generally the plan consists of 2 phases introduced gradually overtime with subsequent additions allowing for more self-sufficiency and power sustainability. Heres a little gist of the setup:

There are few ideas of a compressed air vehicle and generator which I am planning to build with a friend in Australia, but ironically I can only do that out of Singapore as we are not allowed to do so here. I have few ideas I am researching and developing on my side which allows for electricity to be generated on everyday household usage, but I won’t be including them as of yet as to protect them as patents and from intellectual property thief.

It’s pleasing that such homes are becoming much of a reality now with solar panels very much cheaper than it was 10 years ago. There are however few things which have to be ironed out before such plans can take flight- There had been word from Daimler Chrysler and sadly, there are no plans to bring the smart series of city cars into Singapore, together with LTA and NEA’s red light for the Segway Human Transporter to be used on our walkways here. So realistically, I will give this home about 5-8 years down the road before this zero emissions transport and self-sufficiency concept can become real.