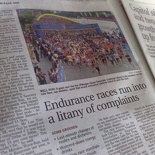 I read with great interest in today’s front page article on the Straits Time on poorly organised races in Singapore. With runner’s experiences and the bad of the runs exposed. While the OSIM triathlon and SCM taking the few “must run” and better organised events of the annual runner’s calender.

The interesting thing is the Passion run and City Duathlon took center stage with their respective longer and shorter distances (people just complain over anything right?), the best overal “winner” will have the 3 paragraphs about the failed Mizuno Wave run last year at Bedok reservoir, hahah eat that VGO!

As quoted from the article:
The Singapore Athletic Association (SA) president Loh Lin Kok recently questioned the credibility of some events organized, who he felt were more interest in making a buck buck than holding a proper race, and has called for regulation through the SAA. “The needs to be a system and there needs to be accountability”.

With that, I hope that this will maintain a minimum standard in all races to come, as such races always all seem to be too commericialsed that it dulites the sporting spirit of the runs.

The article failed to give honorable mention to races such as the Safra Army Half Marathon and Swissotel Vertical Marathon usually held year end, which are also excellent races year after year from my experiences. In all, it’s the newer and smaller races which usually give runners the fits, either by worst organization year after year and unjustifiable higher registration costs, like the upcoming Mizuno Wave Run 2008.

Boycott the shitty races! After all you runners have the final say.