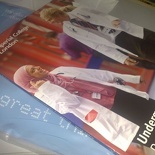 Look what I got unexpectedly in the mail- A thick blue plastic wrapped package which reads Imperial College London, whoa presents! cool!

Ripping out the contents revealed a full 140 odd full colour printed 2009 prospectus on yes you guessed it, on Imperial College itself. And hey it’s even more posh than the one Trinity of Cambridge sent me. For the record under the 2009 TIMES good university guide, the Imperial College is currently ranked 3rd in UK and 5th in the world, well if ranking matters to you. But studying in Imperial is going to be expensive, considering it being smacked right into the affluent areas of London itself, man will that be a pain in the pocket.

But hey wait a minute, I didn’t request for a prospectus, as I already knew what I wanted online! Mmmm I think they could have sent this out of courtesy from the details I’ve provided my emails with the engineering department. Good on their part.