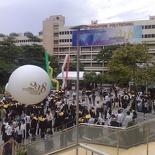 There we have it, my graduation at the 48th Singapore Polytechnic Graduation Ceremony 2008. The opening of the first session was witnessed by our guest of honor, RAdm Lui Tuck Yew, Senior Minister of State Ministry of Education and Ministry of Information, Communications and the Arts, who also presented the institution prizes (3 Lee Kuan Yew Awards, The Toh Chin Chye Gold Medal, The Low Guan Onn Gold Medal, The Chua Chor Teck Gold Medal and The Tay Eng Soon Gold Medal) to the 7 award winners as well. This ceremony was also held in same session where the Chemical and Life Sciences diplomas were presented as well.

After the institutional awards, I was rather fortunate to have my diploma award ceremony at the second session, in other words right at the next slot, so that beats having to come back later or another day for the 2nd half of my graduation. It was during my second session in the afternoon where I received my other remaining awards, namely the Shell, Micron Semiconductor, Institution of Engineers, MMI Holdings and the OCBC prizes. 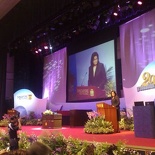 I was touched and moved by the response of the crowd when I was last on stage for the award- after the speaker went through my whole list of awards before saying my name (the cue to move forward to collect your diploma), I was greeted by the loud cheers, applause and classmates/aquantinces calling out my name, which thundered throughout the convention center.

It was almost an unreal moment, despite it being just a moment across the stage, it felt like an eternal symphony through a sea of camera flashes as I made my way towards our smiling and overjoyed guest of honor. He congratulated me with a short question about my future plans on-stage before handling me my award file, medal and both of us turning to the cameras. I would like to express my heartfelt gratitude and a big THANK YOU to everyone attending the session today for your great support! 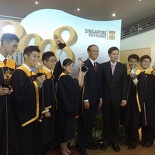 Every session ends with an air-conditioned reception above the auditorium where we get to mingle with the guest of honor for that session, the principal, board of directors as well as lecturers. A hot topic there will be much on our future plans, let be national service or plans to further our studies, thats besides the on-going photo session with all the VIPs as well. The press was there as well who did an article on the 6 groups of twins graduating as well.

I believe today will be one of the few very memorable days of my life- I never thought I would come so far in my chosen path in Polytechnic, let be excelling in the dragon baby year/cohort. I believe I would never had gotten so far without my family, my lecturers and my friends who were always there for me and behind me when I needed them. Many thanks to all the guest of honors, directors, lecturers, classmates and even ex-course mates who sent their well wishes and congrats. You rock!

Well here it is, though I did not mention anything about what I’ve got on this blog dated anytime before, it’s already very much an open secret. Here are the awards I’ve received today:

With other honorable mention:

I was not able to get any good photos to date, but they will be sent by the official photographers of the event. Those photos taken by my parents are rather distant from where they were sitting in the convention center, so I will post the better ones once I get hold of them. 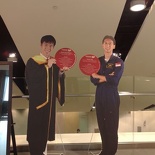 On a sidenote, interestingly, each of all the 7 institution medalists have a life-sized cardboard print out, showing us welding a red circle disc listing our awards within. We were amazed when we first saw that and didn’t saw that coming from our group photo-shoot few weeks ago. Personally I found that was rather neat idea our media department went out in creating, we were honored. Laughingly we were so amazed at looking at each others cutouts, I remembered one of the marshals jokingly telling us that maybe we could take “ourselves” back at the end of the whole graduation.

Without further ado, here is my media writeup, as also featured in the graduation booklet, campus fullstop publication as well as the alumni SPAN magazine:

Shaun Chng, the Multi-Talented Entrepreneur
Engineer, designer and entrepreneur. Also an avid athlete and fund-raiser. There are many facets to this year’s Lee Kuan Yew Award winner Shaun Chng Shing Ji, 23, but they are all bound by a common thread: passion.

A fascination with how things work and a knack for building gadgets as a young boy eventually led Shaun to choose the Diploma in Mechanical Engineering course in Singapore Polytechnic.

In the Polytechnic, the engineer in Shaun led his team to win the institution’s SPINNOVEX Gold Award for their final-year project, a universal gaming motion simulator. Shaun was also presented with the Model Student Award in 2008.

The former student of Delta Secondary Secondary School and St. Andrew’s Junior College knows that to succeed, he has to complement his training as an engineer with other areas of expertise like design and marketing. Being in the Creativity, Innovation and Enterprise (CIE) option of his diploma course has helped. It is no surprise then that Shaun has been making money offering product design and IT services. “These freelance projects hone my inter-personal and entrepreneurial skills,” he added.

Shaun’s passion has opened up many opportunities for him but it is his perseverance that has helped him excel—both in his studies and in other pursuits. Shaun is a competitive runner and has completed two full marathons and four half-marathons. Active in the SP Track and Field Club, Shaun has represented the institution at the Inter-Varsity Polytechnic (IVP) Games in the 10,000m event.

Despite his hectic schedule, Shaun finds time for community service. One memorable experience was a project organised by the SP Rotaract Club in Medan, Indonesia, where he spent one week teaching English to students and cleaning up old folk homes and orphanages. “This is my way of helping others and making a difference in their lives,” he explained.

Passion and perseverance also contributed to his perfect GPA score with 41 distinctions and As for all the modules in his three-year course. In the future, Shaun sees himself pursuing a career in research and intends to further that aim under a scholarship to read mechanical engineering. With his kind of perseverance, it would be no surprise that he is on his way to achieving his dream.

You can check out more of the graduation at the SP’s graduation website.

Oh yes, last but not least, I am on TV again!