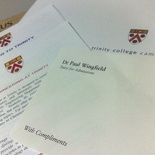 About 2-3 days after I requested a 2008 prospectus from Cambridge. It arrived in a shiny wrapped blue envelope, the lack of any intrusive airmail postage and the impressive short delivery time probably signals this set of printed documents originating from a repository in Singapore, possibly the British council.

I am intending to apply for a place in Trinity College, thus the relation of the package from Trinity itself. Inside contains a full set admission and application guidelines together with the main college prospectus guide, Q&A guide (though theres nothing in there for Polytechnic students), together with a slip adding the personal touch with compliments from the tutor of admissions Dr Paul Wingfield himself.

I’ve been doing quite a fair bit of research work on major league University admissions. Later do I know that with the exception of the usual contact channels through the rather commendably down-to-earth college admission tutors (we don’t call them “Deans” like we do here in bombastic Singapore) and the respective college unions, online student discussion forums, SP staff, freelance clients to even the people you meet on the streets can provide rather invaluable information as well- little bits of the puzzle I am putting together to prepare myself, especially for the admission interviews ahead.

I was initially quite lost as most of my senior peers and lecturers are mostly Singapore or the most Australian based, and can’t help much on on their experiences and detailed procedures to enter- little critical things for an international student like me with a Singapore Polytechnic Diploma- an exceptional case. This is so as the content published mainstream are for students applying within UK with an ‘A’ level qualification, (let be international students with ‘A’ levels as well) with me neither falling into any of those categories.

Back what?
As much I value feedback and comments, it’s from all these contacts where I also come to know about back door entries as well. Apparently from a mother of a PSC scholar studying in Cambridge, that successful scholars under the president scholarship (PSC) are more or less guaranteed a place in the top universities, so by the organisation writing to the college involved for a conditional place without any interviews at all. PSC is prestigious and powerful, to the extent of being able to defer national service for guys without a doubt too (as highlighted in this particular case well), so you can see the push of power here as well.

However, the government scholarship I am in for don’t think likewise- They have a stand that all their scholars are able to apply and enter their universities of choice based on their own ability, refraining in any aid whatsoever (strangely, despite being a relatively large corporation themselves). This too as they believe that their scholars get far better satisfaction and devotion in entering on their own accord, though the odds are ultimately still on them.

With respect to admissions only, don’t this give PSC scholars an unfair advantage? Given that, if you were to get into a top university (after all those interviews, etc) with a PSC scholar, does this mean that you are more of a self made person than the other who entered based on direct recommendations?

As excited as I am jumping to pounce into completing my mainstream UCAS application for Cambridge, it’s puzzling given the PSC case, knowing that colleges always accepts applications fairly.