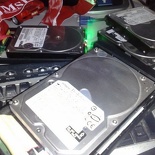 Finally, finally! got my PC up and running at full capabilities, that is of course with an absence of 1-2 days having to deal with unsupported so far my experience with Vista had been a bitter-sweet one, but I guess that is something I will have to live with as Windows XP, though faster have it’s software limitations as well. The last weekend was spent mostly backing up my data, about 400GB odd of work and raw video which took almost a whole day plus and overnight transfer over 4 harddisks before I can free a spare 500GB drive for my PC.

When I finally got vista up and running, Benchmarked my PC 3D Mark 2006 score of about 11600 at stock non-overclocked speeds speeds which is reasonable for a not so high end budget upgrade. Based on future mark’s website other systems based on my similar Quad core processor, single GPU configuration can go up to close of 15k scores when overclocked, but overclocking is something I won’t be doing.

Getting vista to run programs is almost like my experience with trying to install series 60 symbian applications in my phone- It’s horrible! Many of my favorite programs are not compatible and I had to scourge the web for updates and support. Here are some difficulties of “complains” as of date.

That is all I have to date. Luckily I did not purchase the 64-bit version of vista, or I don’t think I will even be done installing all the crap by now. For the good side, the “Im lovin it” part of vista will definitely be the Aero interface which allows 3D scrolling of windows together with effect. So as I come to know, can be enabled at the quick launch menu or pressing the “app” icon on my Logtitech G3 mouse, wow so at least I am fully utilizing my mouse now! The instant search function is also neat too.

The thing is now after installing all the need MS patches, things are starting to get up to speed. So in the end once you get it all up and running, that is where everything will truely shine. Fired up C&C Kanes Wrath last night and continued my saved campaign, completing all campaign missions on Hard difficulty at the ultra settings and 1920×1200- I am starting to appreciate what I can’t do on my old PC now.