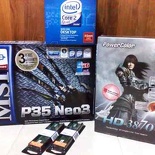 Got some cool stuff today, or like those peeps in hardware zone will call “a Hoot”, will let ya in for in with this teaser on the left to figure out the parts.

I wanted to challenge myself in building a sub 10k 3Dmark2006 PC around $1000 without overclocking, the budget itself is a challenge I gave myself too, but I think in the computer world, what you pay is what you get. This system will be a major upgrade from my current Pentium 4 system, retaining hard disk, power supply, media drives and casing. This is so after countless revisions and price checks over the last months, finally I can have a capable system both for work and play!

I was rather satisfied and fortunate to get the processor and board at that price as no store will sell them to anyone so low before, kudos going out to the helpful staff at Bliss computers. The Radeon card comes with a professional cooling system from Zalman, so it’s very much a dual slot cooler card with ultra zippy DDR4 memory- ATi’s most powerful single GPU solution to as of date.

I was initially considering the cheaper Geforce 9600GT ($239) for my graphics solution till Vista SP1 came along with DirectX10.1 support, which yields a promising 20% increase in performance in Assassin’s Creed with 4XAA enabled. Assassin’s Creed is one the first DirectX 10.1 game to be released recently and only the Radeon HD3800 series cards are the more future-proof cards in the market today with DirectX10.1 support, therefore my rather unusual shift to ATi considering my 2 previous graphic solutions being Nvidia cards.

Assembled and replaced all my old PC parts in the evening and got everything tested and working, only that my re-animated hard disk with XP refuses to boot in my new system, it’s not an activation problem, which I can get done by calling up Microsoft tech support, but more of a boot incompatibility. So a backup, reformat and re-installation of XP is the cleanest solution. The bad being that I hate reinstalling all my programs and games when I get vista soon, gonna pop by SLS soon or maybe tomorrow to get Vista home premium with SP1 so I can get my system up and running by next week.

Now to backup about some 400GB of data… sigh.