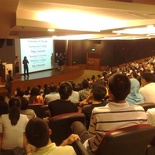 It was a busy weekend. Was at the Civil Service College (CSC) yesterday, University of Chicago, Dartmouth, Duke, Stanford, Wellesley and Yale were there to give a talk about each of their universities. It was largely a talk on “selling” their colleges, which I personally think, well, is not exactly needed considering the excess of applications the Ivy league Universities receive every year.

So it’s more of a session for them to talk alittle bit more of the information you can find of their websites, touching on student life to even the nitty-gritty things like the presence of inter-campus shuttle bus services and study area opening times for muggers. The 2 hour session only managed a bleakly short 10mins Q&A at the end, held in an auditorium spilling out in the excess of an odd 300 audience strength. Then, unlike most other college talks, the speakers all simply just vanished thereafter, so it’s very difficult to get any post-sessions questions through at all, even if you try catching them on their way out, it was that bad.

Majoring in mechanical engineering is a very interesting topic with relations to the choice of universities, after all worldwide rankings are irrelevant with respect to your chosen major (contrary to it being an important factor perceived by most Singaporeans). I guess that is the same for other majors such as economics, let be the arts. So after narrowing down an considering my options, these are the colleges I will be going for and hopefully able to enter, based on preference:

I won’t exactly say that I am setting my standards too high, but I just want to push and see how far my achievements can bring me, because you won’t know until you try. However, the thing which is really bugging me is the SAT scores required to enter my first 2 choices, based on statistics, 21% of successful applicants actually scored 750 to the perfect score of 800 for each SAT component, my scores are not even close! But it is something I have to endure now as studying is US not only cheaper given the exchange rates now, the college atmosphere is generally better too.

DSTA scholarship interview
Had my DSTA interview early today, it’s the last of the DSTA interviews for me. As expected, the interview was generally geared more towards authoritarian fault finding, in other words trying to find all possible ways which can be possibly wrong with you under pressure, so that may be a tip or two for those taking it.

I managed to handle and answer all their questions, including technical ones and didn’t mess up as a whole, but I constantly felt that there was something missing throughout the interview- I can’t engage them, it’s like a wall between me and them. After all we are talking about interviews by the top management, specifically with the Chief Executive, so I guess it was natural if this form of distancing was evident. Given that, I can’t really tell how well I did, even wildcards such as perfect grades or institutional awards don’t seem to raise an eyebrow. But I think it could be better than actually screwing up- things could be worse, so I think did not that bad overall, reassured by witnessing an occasional discreet nod of approval between the 2 interviewers bleakly at times, hope all goes well.