Held this morning at the Victoria Junior College, the dialogue session saw a panel of key personnel such as Mr Jacques Rogge (President IOC), Mr Sergey Bubka (Chairman, YOG Coordination Commission) and Mr Ng Ser Miang. Security was relatively tight with police presence, as hinted by the police vans and cars parked around. The gathering saw “top” students from all walks of youth as representatives from various educational institutions in one big melting pot- namely tertiary institutions, primary schools, ITE, polytechnics and JCs to raise questions for the dialogue.

The morning started with a brainstorming session in groups to think of any points or ideas we had not thought of, from the perspective from the host, athlete, volunteer, performer to even the spectators point of view, now that really brought things into perspective! 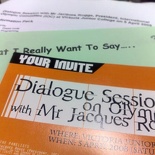 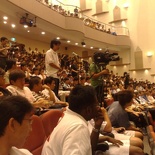 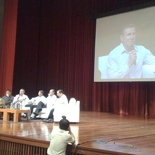 The dialogue session lasted roughly 60 minutes, the time limit only allowed a handful of questions to be addressed though it will be more beneficial if more time were actually allocated. The dialogue also saw questions posted by SMS as moderated by the VJC principal on stage (who was rather unnaturally on the edge of his seat throughout). The press and media were everywhere, if it was not DSLRs, video cameras, it’s all notebooks and tape recorders all aimed at the panel.

Few Interesting points includes addressing controversial questions of “Singapore’s athlete imports”, the ability of people in Singapore to recognize and appreciate unconventional sports such as beach wrestling and stunt BMX (as laughingly, not many people in Singapore actually know of these sports) to even the route the torch runner will take around Singapore. Few commendable points includes how can we see this YOG as a possible benchmark for subsequent YOGs to come and the chances of this event bringing us closer to hosting our very own Olympics.

Everything looks promising and was addressed in a rather professional manner with some occasional quirks and laughs. The event ended round noon with a reception. Everything all looks set for the event come 2010!