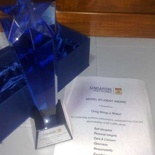 The SP model student and prize presentation ceremony was one today, and I was one of the 17 lucky few in the whole Polytechnic who were selected to receive the prize. This is so together with various sports and community club presidents also being awarded prizes for their achievements and contribution to the polytechnic itself.

Registration was a breeze and fast. Met and caught up with few of the SAA officers and staff I have not met up in ages! The event was held at the Moberly T11 block and the prize presentation was pushed indoors due to heavy rain, if not it will all be at the front large open-air amphitheater where it will really rock. Nevertheless the event went on with various performances put up by the dance club. Everything was followed by a dinner and buffet dinner reception on the ground floor surrounded by live smooth jazz as performed by the SP Jazz club and Singers.

Huida my track and field president was also there to receive his award together with Peilli for community service under her presidency in SP Rotaract. Met up with track mates Alvin, You boon and Darius over dinner who were there to attend the event as well.

I got a certificate together with a rather large full glass trophy which is really heavier than it looks. It’s clad in faint blue and looks very well constructed, not like those cheap trophies you can win in those track & field events with the screws visible from the bottom! Very solid and nice piece indeed, but sadly I don’t think I will have space for it on my awards shelf at home yet, so I think I will put it in the included storage box tucked nicely in safe storage in the meantime.

Here is what they’ve wrote of me in the awardee information booklet, though I wished they’ve mentioned about my service to the community as well, especially the one I did in Medan Indonesia, but nevertheless:

Shaun is an outstanding student with an average GPA or 4. He is known among his lecturers for his learning attitude, diligence and team work.

Shaun is a member of the SP Track & Field Club management committee. He has represented SP in a number of marathon events like the Swissotel Vertical Marathon 2005, Singapore Marathon 2006 and the Mizuno Wave Run 2006 and 2007. In all these events his drive and self-discipline were evident.

Also submitted the remainder documents of my DSTA scholarship earlier today as well, hope I get a reply from them soon!