The 2008 National Vertical Marathon is on at the Republic Plaza, having just came back from the event, so here are the highlights and happenings of the event.

Race conduct
It’s quite understandable the organizers decided to take on the largest category head on first thing in the morning- the Mens open, which is the category I was registered for too, together with few of my classmates Andre and Danson, less this friend who broke his leg just a few days ago. The others in the track team are in for the competitive team event in the afternoon, wish them luck! Given the 6.30am reporting time, queues grew to a maximum of about 50 meters at it’s peak but was managed rather quickly by the 8-10 counter staff.

Participants are detailed based on a first come first served basis with the first detail firing off at about 7am and subsequent ones at 2 minute intervals. My detail, 23 was scheduled for a 7.42am run which gave me about 30 minutes, which is not too long to be annoyingly boring and not too short either to prepare ourselves and warm up adequately before being called into the holding tent for dispatch. 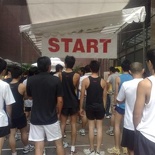 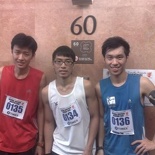 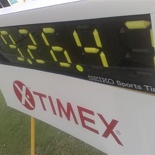 So… Timex sponsors the cardboard cover?

Route and Finish
The route is largely monotonous continuous anti-clockwise climb to the top, 2 flights per floor with one having an even number and the other flight with an odd number of steps. I noticed it myself, but confirmed it with other runners that the air is rather stuffy and unventilated from the 40th floors up, making some runners rather light and dizzy from the lack of fresh air, it won’t be a matter of time when someone throws up around there. I took about 12 minutes to clear the building, overtaking about a handful of 4-5 people from the previous detail. There is however, an adequate amount of water points and marshal stationed every 3-4 floors from what I recalled. The finish showered finishers with an even choice of ice cold water or Berocca effervescent drink. Strangely, there is no distinct water point on the ground floor at all. Though some Berocca staff where distributing them personally by the cup. 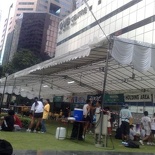 The A maze event
As misleading as it may read- Where is the maze? It’s supposed to be pronounced Amaze from the word Amazing and is part of the efforts made to improve the event and make it better than of last years. What it comprises are 5 events typical of that in a carnival, namely- 1) Holla-hoop for 15 rounds or chatek 5 times 2)Playing twister standing up 3) Navigate a zig zag after 15 head spins to make you dizzy 4) Memory game 5) Math toss game. The fastest one through all the stations will stand to win a digital camera. Otherwise you get to spin a wheel to win a prize allowing you to win accessory items such as clear files, coasters and notepads. I got a metallic tin coaster set called the “mystery prize”.

Quite an impressive goodie bag
Goodie bag items are quite generous this year and I thought Swissotel VM was generous. But for a $20 registration free, we have tons of little items, vouchers and coupons from skateline, apparel sponsor TYR, Eng wah cinemas, fitness first and some food vouchers just to name a few. There are quite alot of facial and toiletry items such as cleaners, sample deodorant and strangely even a lipstick just to name afew! Theres a Dec 07 Mens health magazine. The event shirt is a dry fit by TYR, not like FBT as last year, but the print quality is lower.

Instant Photos
Lastly, the “on the spot” shoot and print for the finishing certificate is very nice touch. And simply beats the heck out of the “fill in your own name- blank cheque style” A5 cardboard we got in last year’s event. Very commendable on that part, especially using instant photo printers to churn out all the photos taken, it takes less than 5 minutes to get your photo on the certificate, only that there is no official timing written like that of swissotel.

Ok thats all I have so far on the event feel free to share yours if you have any.