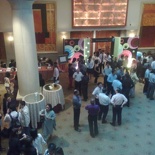 They did quite a good job in keeping the guests entertained throughout the dinner. In fact there was never a dull moment that we would even have time to get on the food- There were lucky draws conducted throughout together with OMG performances by lecturers, not to mention pop quizzes such as guess the song, etc. There were contests put up for the best dressed male and female where turns out much into a battle for prize where they were pitted with humorous stage up tasks to get the best response from the audience haha. 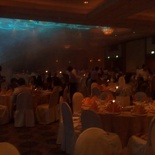 Inside the rather small Ballroom 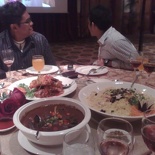 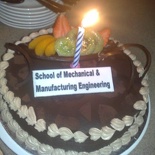 Each table gets a birthday cake lol!

As mentioned, the crowd consisted of an even mix of students and lecturers, though the guy to girl ratio is a little bit off given the nature of engineering duh (now wait till we see the accountancy school dinners!). My table was a Muslim table with only 3 Chinese in the table of 10, so we Chinese were literally served like an al-la carte menu individually while the everybody had their servings off the rotating platter on the table (platter servings are so for all non-mixed tables). This came very much as a blessing in disguise despite the small Chinese portions served to us- we had more variety and able to share the food with our Muslim friends! The bad is no red wine is served on our table only sparking juice duh!

I got a pair of Jetstar Asia Tickets to KL from the lucky draw which I won’t see myself using at all. Just when we thought desserts are enough, The event ended with a MM birthday cake for each table- talking about down to details for the event haha!