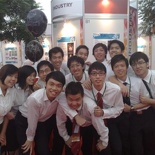 Today is the 1st public opening day of the SP open house and Spinnovex 2008. That is also when the crowds start flooding in to view all the various exhibited items on display as part of student’s final year projects.

The whole event started in a bang with our guest of honor & nominated MP, Mr Edwin Khew visiting our project on display as part his guided tour. Glad our department director chose our project as part of the featured items in the open house itself, really appreciated that.

My team’s project is a force displacement gaming simulator, it’s very much like a motion simulator, only tailored for gaming. The simulator is able to take on almost any force feedback racing or flight PC games you can buy off the store shelfs. It works by pulling all the game’s Direct-X forces transmitted to force feedback racing wheels/joysticks and translates them in numerical values which our Visual Basic simulator software is able to compute, plot and tailor on force graphs which in turn activates the motion actuators to move the simulator in real time. So for example if you drive into an object or obstacles, the system will respond accordingly and “throw” you forward in the simulator, this is also true for G-forces as well.

The 2nd day of judging was held in the morning prior the visit of the VIPS, thereafter our project is open for the public to try out and ride for the whole afternoon. As our project is still largely a prototype, never before had we placed our simulator in actual service conditions, so I was rather super cautious the moment we opened up for the public (safety was another big concern as well). But amazingly it stood out firmly and operated flawlessly for the whole day with thrill riders in and out non-stop without any problems (even with a long queue forming at our booth). That has allowed us to fully understand the stress capabilities of our invention. With some refinement and maintenance first thing tomorrow, I am confident it will go on strong for the whole of tomorrow as well.

Even the press were invited- they were they all our my project as well. Besides official school photographers and video crews, SPH Digital Life reporter came and did an interview about our project. Even Channel News Asia was there to film and conduct a camera interview with me. 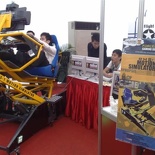 Our gaming simulator booth in the main white tent 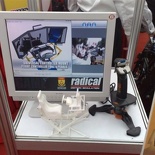 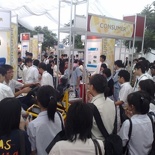 And man were we a crowd magnet!

For today, I have very much our student support group and TSO to thank today for getting most of the admin items running smoothly for us in the background, such as tools and the printing of brochures, I do not know how our project would have been without them. Moreover, I really really appreciate the many commendation we got today on our project, not only from students but even strangers from the public as well,

Today was a good day, so was the day before, may tomorrow be an even better one!

See mosquito larvae ‘killed’ by tank, race like F1 champs in 2-metre high simulator and other student innovations at Spinnovex 2008 – a showcase of the best works by SP students.

The tank made its way slowly into the dark recesses of the building’s rooftop with its powered infra-red camera. Once the target is spotted, the tank immediately releases a deadly substance and kills it.

Sounds like something out of a terrorist movie? It is actually an invention of 19-year-old Singapore Polytechnic student Du Zhenglin and his 5 project mates. The team, working with National Environment Agency, took 4 months to complete the Anti-Dengue Surveillance Vehicle (ADSV). Able to reach previously inaccessible areas, the ADSV has been tested at water-tanks on roof-tops.

You can also race the streets of an imaginary city in a one-of-its-kind motion simulator which measures over 2 metres in height. The machine, made by third-year student Shaun Chng, can manoeuvre and tilt in multiple directions to simulate the actual forces and displacements felt during racing. Powered by a complex system of electro-pneumatics, it provides gamers with an authentic and totally immersive experience.

Zhenglin and Shaun’s projects are among 105 innovations to be showcased at Spinnovex – Singapore Polytechnic’s biggest innovation exhibition this coming Thursday 10 January 2008. Aimed to better our everyday lives, these innovations are final-year projects which are categorised into Industry, Consumer, R&D, Environment, Life Sciences and Robotics. 30% of the projects are industry-based projects and are likely to be commercialised.

Some other notable projects include: