Got my spanking new N95 8GB today! Would be setting my newest phone addition to charge overnight, in the meantime, I can post of what you can expect in the box in the traditional “unboxing ritual”. Will get to play more of it tomorrow. 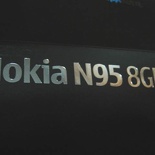 Its all over the box! 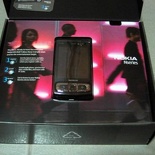 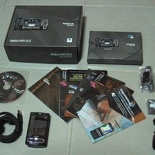 Thats all in the box

As you can see, the included package is rather basic, just the program/software DVD, AV/sync cable, headset, the new mini Nokia charger, the BL-6F 1200Mah battery and quite many booklet/manuals (six) to go through inside a cardboard envelope.

There is no slip case or leather case in the package as seen with the classic N95. Notably even for the classic N95, the slip case only came with units sold in Singapore and not anywhere else in the world (to the dismay of many N95 around the rest of the world). My phone is the Singapore variant of the N95 8GB, which means it’s not a parallel imported model, etc, you can check the country codes here.

Being a fan of all-in-one devices, this phone will be replacing most of my gadgets I have, namely my old 4MP A80 Powershot digital camera + video recorder, and will supplement my existing HP rw6828 pocket PC phone. 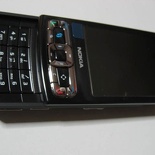 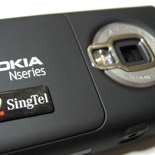 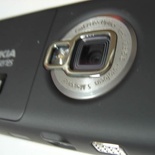 Singtel Xmas fair at Ngee Ann City
Yup, that’s where I got my phone today, if you don’t notice the big white tent with 2 bobbing balloons by the side at Ngee Ann City civic plaza, you definitely can’t miss out on the Ads in today’s Straits Times, not to mention those the day before in the new paper, today, etc as well. All these means something rather special, indeed. The N95 8GB I’ve been eyeing and price monitoring have it’s contract prices down to $638 with a 21 month contract- $160 lower than their rates last week and $410 lower than getting it without contract from external handphone shops.

Wanted to trade in an old but fully working Motorola V3 phone which had always been lying around the house as a spare phone, which fetches a $60 trade-in value (CO2 Corp does the trade in and dishes ST discount vouchers for your handset purchase), but was put down $10 due an old end-of-life battery, that’s including charger, box everything (yea I brought the whole package). I must be a retard to sell all of those for only $10, so I turned down the ridiculous trade-in offer.

The thing I found crazy there was the queues, I got a queue number at 4.30pm and was only able to be served about 4 hours later at 8.30pm+ despite being on the Singtel Priority express customer line (wonder how the rest on the normal lines are doing).

But there was an SMS alert system though, so you can literally run all around Singapore in the meantime when the queue runs and be alerted when its approaching yours- which what I did and missed my queue number by the time I returned. Despite that, I was quickly tended in less than 5mins to upon approaching the staff, I guess I have mainly the friendly and very helpful staff (consisting of mostly Singtel staff from all over Singapore and few part time helper students) who helped me not only but several separate occasions and breezed through the crowds with ease.

“So based on the crowds here you are working till midnight?” we asked “No I think 2am!” said the staff! – The roadshow response was so great, the event doors are closed from 8pm onwards (requiring your queue number to enter), reassuring customers inside that once you’ve taken you queue number, we will tend to you by today no matter what. I guess gross the takings for Singtel today can easily exceed the $2 million range, despite Starhub’s bleak attempt to station a small kiosk near the event itself.