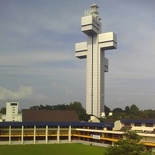 Got quite a bit of the “heaty” lately but kept that down very well with more intake of water (not to mention toilet visits) and cooling “liang” tea brewed by mum. For those who know, I have quite a high metabolism rate and have to go with almost a full Med bottle of water every 2 hours to avoid feeling thirsty (or onset of dehydration). Anything less for a prolonged period and a may come down with a slight fever. A runner’s curse? maybe.

It could be the present demanding pace of school now or the year-end freelance projects piling up which always kept me on the edge now, not to mention stressful. I think I have to replan my lifestyle as I find it kinda bad to be always overloaded and sleeping late. Though I’ve seen worst during my last semester exams I think it’s the negligence on my side which resulted in my now present inefficient sickly-ness. I should take more care of myself.

Training
Ended last Friday’s school with my usual weekly workout at the school gym, only that strangely it was very crowded by the time I reached there not like the past weeks. Had to even queue up for some of the machines there. Then there was this guy in SP dragon boat attire who kept looking and trailing me, he even approached me to help him assist his shoulder press, later he like followed me some few stations as I was finishing my sets. That felt weird as we do not know each other at all and ain’t SP Track & Field and Dragon boat like “Enemys?” haha (I was happen to be training in my SP athletics track & field attire then). Benched my last sets and left the place thereafter.

Nevertheless, got about my run at my usual Ulu Pandan canal yesterday afternoon for pre-marathon mileage, despite having a slight sore throat. I just hope I don’t fall sick before my marathon, not like what happened for my 2005 one. I am really looking forward to my 2nd Dec 42km.

FYP
FYP-wise our simulator frame is almost done and finalizing the little design fixtures and details here and there. And yes, we had exceeded our project budget, so we are very thrifty in what we buy now.

Academic
Got a letter from the MM director’s office sometime last week about attending the student final year assembly and prize presentation, same as the one last year to receive a book prize on XXXX module which they didn’t mention – so it’s like “stay tuned for more” dang… Few of my usual kaki’s didn’t receive their letter this year, and they wished their lecturer had forgotten to pass it to them!

Earned a small tidy sum after running some advertisements on the site for about 2 months. Will be able to pay for the site’s hosting for about 3 years or subsidize a considerable chunk of my upcoming Nokia N95 8GB which I might get by year end when the price is “just-so I-wish it will-be so-right”.

Would be touring Terminal 3 tomorrow, woot!