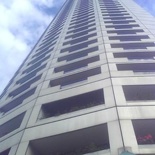 Swissotel Vertical Marathon Post Race Report
The annual Swissotel Vertical marathon was held this morning and the race was great and well organised just like every year. Unlike open flat races, vertical marathons are definitely one which also caters to a niche group of sports enthusiasts, so the smaller event size and given strict registration cap from the organizers will give this race more exclusivity and better runner satisfaction.

This year saw another twist in the registration times by category – having the youngest and oldest category running up first this time. This may be to the dismay of those who thought that they can register in ascending age group, complete the event first and not having to put up to wait for other categories to flag off. However, that is a slight issue given the job well done by the organizers in explicitly stating the registration timings long prior to the race day, so using the same category system this year also kept the registration lines rather manageable as well as well as the crowd control in the area.

The Stairwell
It’s the same route every year, but I still love to talk about the layout of the stairwells every year – going anti-clockwise on the 1st quarter or floors before remapping to a clockwise and anticlockwise route on various parts of the course with a variety of 2-4 flight arrangement can work out evenly the muscles on both sides of your legs and arms for pulling. Most modern building these days such as Republic Plaza, Suntec Towers, etc all have one directional monotonous layout, the Swissotel is always an exception which why makes it such a personal favorite for me.

Generally from experience, it’s preferred and recommended to clear the 73 floors before the 50% percentile of registered runners as the stairwells later will tend to become more littered with spit, damp railings and the occasional vomit patch, (which are of course actually all not within the control of the organizers). With the exception of few spit patches (presumably left by the older above 50 groups), I personally cleared my run without much obstacles on the 20-29 category, so thats after the “under 20” and “above 50” categories, putting me with relatively cleaner route which is roughly 30% utilised by the whole crowd.

Ventilation
The floors are pretty well ventilated this year, with fire doors open every 2-3 floors allowing the air conditioning to leak into the stair well. There are no forced blowers or ventilators as an overdraft might be too much for the runners. Commendably are the race marshals who kept cheering the runners on every floor, and considering they are doing it for almost every runner in every category, it’s quite a tough feat still to keep up that smile and motivate runners on. Very good.

There was some renovations going on around the 50th floor onwards, filling the stairwell with a strong board glue smell for about 5 floors at a go. A let down with current scheduled renovations around the area.

The start line this year is slightly pushed forward compared to the last. And there are now 3 champion chip mats throughout the course- 1 at the start, 1 at the 70th floor and the finish. You will be greeted similarly with a mob of photographers on top of the few race officials all clad in their event tees, then there are also the drink and medal ladies who will put on the medal for your you in a “ceremony” style, topping up the ever so sense of achievement when reaching the top. 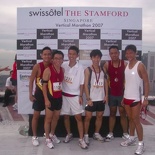 Post Race
There were plenty of bottled water at the top, and if you missed it there more at the ground floor too. There were marshals leading you out to the lift where they will handle everything from guiding you to the lift, calling the lift to directing you out to to the open at ground level. Very well thought through. After everyone had been registered, the registration booths also doubled up as Certificate collection points, and do cert collection set a new record this year- 30mins after submitting your chip, you get your official time and Cert! Very efficient.

Baggage collection
Despite being explicitly stated having no baggage facilities in the pre-race brief, there is actually an official baggage point which came very much of a welcome to many. You will be issued a tag upon deposit and collection is a breeze in less than a minute, also considering that only a handful sub 100 bags were deposited, staff also had the initiative to ask what type of bag to look for before going through the pile, aidding to the faster bag retrieval times. 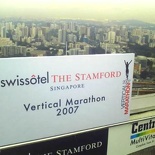 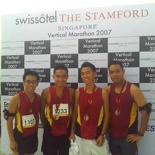 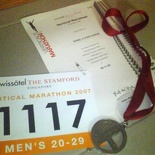 Misc Race Report
Met up with Ahlong and his gang of 9 Div officers who are still currently serving NS, they are also registered in the 20-29 category and most of them are running for the 1st time. For Ahlong & me it’s our third race so far. I completed in 11:55, 11 seconds longer than last year’s. I think I can put that mainly on the lack of courtesy the runners in the details before me- Its very difficult to overtake runners and they will usually hog or are just simply too tried to even notice you to give you way. You have to then speed up and try to overtake on the outside, despite the rules stating to give way to runners on the inside. I had to tailgate few runner for 2-3 floors at a go before overtaking them on the outside, disrupting my pace by a lot.

Though 11:55 is still “descent” (the first runner in my category completed in 7:29), I have one race buddy who had a +1:24 on top of this last year’s timing and considering he’s still in the Army, won’t his fitness be much better? Figures, lol.

Met SGrunner sotong who was queuing up for this Men’s open race, he said that he was going for his PB, wished him the best before heading back for lunch. Will update more when I find out on his timing, lol!

Will upload more photos when I get them from my other buddy’s camera.