Popped by Peninsula Plaza this evening to purchase my new Polar RS400sd, which I managed to get a “damned-good” lobang from a friend. Ahha! my first polar watch and a suitable successor to my Oakley O-matter sports watch. The functions and menus need some time to get accustomised to, but once using it for about 30mins, navigating the menus are like second nature. 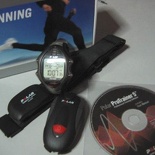 I chose the RS400sd over the 800 mainly because of colour, don’t ask why but I simply love the dark grey/black metallic design far better than the all shiny silver, so that’s an issue on Polar side I guess- one less RS800sd sale due to the lack of colours… Moveover, though the RS800 is more future-proof and smaller, both have about the same weight (after holding both of them in hand, only the S1 is more bulky). Moreover, the new S3 footpod button battery is not as economical and convenient to replace compared to the S1 pod’s single AAA battery. I also do not want to take the risk whether the new 2.4Ghz W.I.N.D transmission frequency for the heart rate monitor is compatible with the current Precor Treadmills I normally use.

So far my experience with the watch had large been positive, with the exception of the buttons being rather hard to press for long periods of time (esp after calibrating and changing all the settings like shoe choice, run display screen layout, height, weight, etc besides time and date, just to name a few). The thing which I currently still can’t get the watch to do is to use a simple stopwatch function to time other runners for intervals without triggering all the computer gadgetry screaming “ahhh wheres the footpod? aahhhh where’s the wearlink?”. It seems that the watch is only made to time yourself running.

This is after all not a just watch but a running computer made into a watch. Looking back like the experience from the movie “Spy kids” they also have a watch which have all the damned functions in the world, only it does not tell time. Not that the RS400sd do not tell time, but I wish it being a watch, it should have at least all the independent stopwatch and countdown timers built into like a “mode” system which Casio made us all so accustomised to. Moreover, I wish the front display idle screen can be customised rather than displaying the generic “RS400” dot matrix logo in front, what a waste of screen real estate which could be used to display something more valuable like an analog clock or a battery indicator etc, come worst to worst at least animate the RS400 Logo!

So far so good, would be calibrating the footpod tomorrow on a 10km run at Ulu-pandan canal.