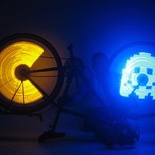 Remember those LED fans from the previous NDP which paints words on the fan blades upon turning it on? It runs on a rather old concept of frequency timing in response to the blades revolution speed- so when it blinks at just the right rate, it can paint full radial text or even images programmed using only 2 blades. Cool right?

And just when you thought those niffy reflectors are cool on your bike, apparently you can get the same effect on your bike wheels as well, courtesy of SpokePOV on the instructables website you can make your own! There is even an option to animate the images with one, two or three spoke LEDs. Now this gadget may just redefine everything “bike wheels in the night”, wonder when can you see them on car wheels given the rather dopey idea of ads on hubcaps?

More step by step instructions to build your own at the link: here.