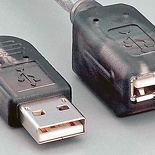 With USB 2.0 starting to show it’s age, the first members of the USB 3.0 promoter group including HP, Intel Microsoft, NEC Corporation, NXP Semiconductors and Texas Instruments said that USB 3.0 will deliver more than ten times the data transfer bandwidth of USB 2.0, which tops out at 480 Mb/s. The new interface will be designed to be used in consumer electronics and mobile applications to be able to deal with digital media file sizes that are likely to exceed 25 GB.

Intel said that USB 3.0 will be based on current USB technology and ports and cabling will be backwards compatible; however version 3.0 will offer enhancements for better protocol efficiency and lower power consumption. The development group will also integrate an upgrade path to optical capabilities for USB.

Only time will tell for the improvement of USB. A completed USB 3.0 specification is expected to be released in the first half of 2008.

Penryn launching earlier than expected
Intel first 45 nm processor based on the Penryn core will be officially introduced on Nov 12th 2007. While there were no details available immediately, Penryn is expected to debut in dual- and quad-core desktop versions (with up to 410 million transistors) initially. The chip will be available earlier than generally anticipated and could beat AMD’s 65 nm Phenom to the market. 15 new 45 nm processors are scheduled to be introduced by the end of the year and another 20 in the first quarter of 2008. In total, there will be more than 750 prodcuts integrating a Penryn process in the near future, Intel CEO Paul Otellini said during his opening keynote.

“We expect our Penryn processors to provide up to a 20 percent performance increase while improving energy efficiency,” Otellini said. He noted that two 45 nm fabs, D1D in Oregon and Fab 32 in Chandler, Arizona are in full production at this time.

While we can see this chip primarily targeted to compete head to head with the “crippled” 3-cored AMD 64 also due to be released into the market soon, the executive also announced that Intel’s 45 nm processors and 65 nm chipsets would use halogen-free packaging technology beginning in 2008 in order to make these products more environment-friendly.