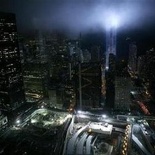 If actions speak louder than elegy, it tells you where we are that the team coverage on the eve of the 6th anniversary of 9/11 alternated between General Petraeus’ performance on Capitol Hill and Britney Spears’ performance at the MTV Video Music Awards.

Osama returned to prime time, only to be mocked for his “impotence” and apparent need for Grecian Formula. A New Jersey community that lost 100 people that day has had to delay expansion of its memorial because fundraising fell short. September 11 falls once again on a Tuesday, we are six years away from the fire, and wondering what that means.

A USA Today poll found that more than two thirds of Americans view 9/11 as the most memorable news event of their lifetime. Far from pressing it neatly between the pages of a heavy book, to be retrieved only on special occasions, the day in memory has gained in power and urgency. Nearly one third said the event changed the way they lived – which is up from 18% five years ago, as though it was possible to see the change, or at least safe to admit it without having to swat away charges that “the terrorists win” if you do anything differently…