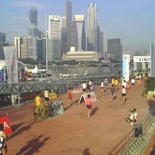 Done with the main report, here is the more personal report: Looking back on the half-marathon today my target timing was a sub 2hour which I barely hit which a gun time of about 2hours 8mins so the nett time will be below 1hour 55mins. The run felt strange today namely hitting a fatigue wall prematurely than what I would normally do.

Did very light stretching before running and my muscles still felt tight throughout the run till the 12km mark where I finally “burnt-in” on the warm up and sped up the pace. But that didn’t lasted for long though – I slowed down drastically to a jog from 17km onwards and it’s difficult to pick the pace up from there – Doesn’t sound too good for my year end marathon.

I remembered able to pull up all my half-marathons with an ending sprint but I simply could not do it today. I believe I can largely deduce that being primarily attributed to my lack of long runs prior to the event- I had not ran regularly for about a month since my exams started and ended just last Friday. Besides not being in condition, I didn’t get much sleep at the stay over last night. Interestingly, nobody at the sleepover seems to have slept well either, but getting a cab for our cab convoy at 4am didn’t prove much of a feat either.

The weather was clear and fair where most were expecting rain. Nevertheless the heat round the finish saw a large number of people suffering cramps at the end point. There was one instance where this army boy who got stuck and almost fell back after getting cramps on both of his legs when climbing a flight of stairs at the spectator stand. Lucky Darius was there to catch him and provide aid too, so we were pretty much like “medics” in singlets for a period of time there.

The carnival below the spectator stand was too crowded to comfort. Even cooling down stretches on the ground proved to be a feat as anyone could simply just trip over you without notice. There was a casualty in this year’s race, a runner collapsed after finishing his 21km, it goes to say even if it goes in contradiction to motivation techniques and pushing one-self to finish a race, always have a place to listen to your body when you least expect it. You can push on in another race some other day, don’t take chances with life at stake.

Dropped by to Marina Food court for lunch with the track gang where Elrick came by too in his shouty Commando’s Attire and his stories of his 8 day field camp last week (which rained everyday). Window shopped around the area before heading home for rest thereafter.

Last but not least, cheers to ChenLing and gang who completed their maiden half-marathon around 3Hours, you are all winners – finishers

Need to bump up my runs during the holidays!