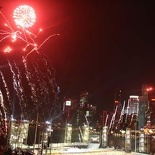 Happy 42nd Birthday Singapore. Well, the National Day parade had just ended and it marks the seal of the first city bay area NDP for the nation’s 42nd birthday.

Also it had been 10 years since I’ve actually watched NDP live and contributed as a performer as well. With that in hand I know the time and commitment one needs to have to contribute for the NDP, especially having to start rehearsal as early as January every week. Besides the rather abrupt and mini hardware showcase by the air force and army, the year’s parade this year is considerably smaller given the smaller stage area. However, given that, performances this year are largely dampened and not as spectacular as what as I know was before.

It was agonizing watching the NDP parade on TV hoping that the performers don’t screw up on screen otherwise painting a bad impression on our events and knowing that the world’s watching too. Besides giving the primary school kids credit for their rather messy performance, they also do not look enthusiastic to perform at all. Our singers are all largely constipated, not to mention the Soka association with their super un-synchronized moves (I wonder why are they even qualified to perform). Other than that, other performances are excellent, I feel that with the exception of those I mentioned, they are actually the ones which really let all the previous NDPs down. And seriously, they should bring back more of the old NDP which we all grow up hearing during the 90s era. If you watch the parade as a whole you will enjoy the overall experience but frankly with these little details in place, the performance was a disaster.

At least the fireworks were decent it looked as good on TV as viewed from my home, I guess the thing which really made this year’s performance a memorable one is the new setting and environment with a potential large viewing audience, otherwise I guess the bay area would be better off for Formula 1 and the upcoming Sheares Bridge/Singapore Bay Run.