There was like 3 written tests this week for me, namely Communication skills for entrepreneurs (CSE) final test which I personally won’t be able to hit good 90+ marks for misreading the last question of the test. Mechanics III test was screwy too with some mistake(s) easily setting me to 70% total score, which contributes to 4% in the overal module score. Then to make matters worst, my Quality Control Module test is easily capped at 91/100 for a calculation error and more question mis-reads! (lesson learnt *shakes head*)

Dang so much for trying for Distinctions. This semester is exceptionally short, I seriously cannot emphasise that further with 6 semester exam papers to come in less than 2 weeks time. Last few semesters easily see a 2 week break after the last academic week for revisions, but this time it’s after the last week- BOOM exams!

So much for cutting the semesters shorter to cater for the intake in like wit the GCE “O” level exams. I personally think Though it’s still possible to get an A for these modules which is the barest minimum I should get, it’s these little bits and pieces of marks lost which makes the difference of a distinction. 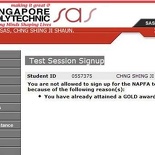 Nevertheless the week ended with a bang with my project group being the first in the class to submit topping it over the rest and possiblity securing good project grades in the process.

My NAPFA test was today as well, cleared my weakest station – Standing board jump with a reasonabel 231cm, not only painting the fact that you can actually train for SBJ (especially techniques) but setting the rest of my Napfa up in the tempo and boost my morale.

Overall here are my results for today’s NAPFA at the Singapore Polytechnic stadium:

Cheers to the track team (who were training there concurrently) for cheering me on for the 2.4km segment. The run was rather messy with at least 30 over runners running each time on the 400m track, making overtaking a chore and delaying timings significantly. The 1st lap start with me as 3rd behind 2 more guys leading the pack. I saw myself moving up to 2nd on the 2nd round and leading the race from the 3rd lap onwards, this made pacing rather tricky as all I have to do is to chase the next runner I lapped.

Nevertheless, finished the 2.4km pole position with 10:14 which is a 5 point A for my standard. SGrunners Tiwaz and ex-track Alec was there too for their “west side evening run-cum cheng-tung desserts later” run. “you sure you run like that? you can easily run 2mins faster right?” Tiwazz said, haha. Classmate Qiwen was taking the test there today as well, cheers on him attaining silver despite running up 4 blisters on his feet for running his 2.4km barefoot.

Lastly, congrats for Zixuan who managed to hit 10 pullups (from zero) in the period of hardly 2 months, remarkable!