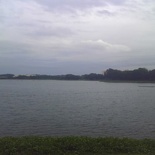 Hey I am back from the mud walk ummmm 2007 Mizuno wave run. If you’ve ran the event this year, I believe you will have quite a little too many comments on the organisation of the event. The morning started with a heavy downpour in the morning, which slowed gradually over time and eventually turned into a light drizzle at the start of the event.

Race Conduct
People who arrived right on the dot do not even know where are critical event points such as baggage points. My start was late with the horn already blown when I rushing to the last available truck to desposit my bag (the other truck started turning down deposits). Then to the start point and started my race before the fun run started. Furthermore, there was not clear demarkation of the Finish/Ending point. Though there was a giant Mizuno inflatable there, anyone could have mistaken it for an interval checkpoint as encountered mid race. Many countinued running after crossing the “end line” only to come across the gun timer 20m behind and strangely greeted by a GRC event finish line on the right and a dragon boat event thereafter on the left.

Run Congestion
Noticable bottlenecks in the race would have to be the bridge at the starting point, which is already expected. Otherwise, it’s difficult to overtake at the reservoir with the path made narrower with the addition obstacles and puddles. The organisers should make a point to close 1 lane of the the road on the tarmac stretches instead of forcing all to run on the 2m wide pavement. Most runners naturally found their way taking 1 whole lane anyway (on top of running on the grass as well), so either way, most of us made our path if not overtaking would be a very tough feat.

Route & Excellent Medical Coverage
The organisers did not establish the 5km route on the map, publishing only the 10km route which strangely, was changed at the last minute without notice. I believe many runners were shocked to hear that the race had ended at the park and some even carried on running towards TP stadium where the race “was” supposed to end. Marshalling was pretty bad with many of my 5km runners friends (not one, 2, but even 4-5) suddenly finding themselves running the 10km route. I don’t think it’s their sense of direction which is questionable as I personally do not come across a filter or clear signs for the 5km route myself on my 10km route. 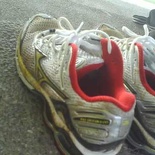 Terrain
Largely due to weather factors, most of the Reservoir trail are covered with obstacles, puddles and mud patches. Making running rather hazardous with the added need for runners to dodge them and making themselves a hazard as well. Luckily on my course, no one fell, tripped on the trail, if not it would be disastrous. You won’t have ran the race without bringing a part of Bedok Reservoir home with you- either on your clothes, legs and of course lots on your shoes!

Horrible VGO Customer Support
Adding to the confusion at the race was the lack of customer support from VGO corp themselves prior to the race day. I’ve made several calls over the past week about the 5km fun run route and confirming the availability of baggage collection, but never even got the chance to reach them at all- either being directed to an unknown extension, put on hold by the reception for ages or simply not bothered to pick up the phone.

Baggage Collection
If you have desposited your bag with friends, or used the TP stadium lockers, you are in luck. Many thought the end point was at the stadium and ran there only to find the place empty (including me). It was only through word of mouth and on stage anoucements where most found out that their bags are actually parked in the corner carpark of the park “end point”. 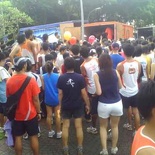 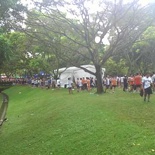 Queues at the event 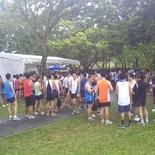 Bag distribution has to be one of the worst I’ve ever encountered- a typical case of dumping everything into 2 trucks without giving a thought how are they to be returned- which turned out to be rather birazze too. To stop crowds from raiding the trucks, one was kept shut for 30mins (effectively shutting out and putting everybody on wait and crowding at the carpark). While the other truck had all it’s contents unloaded – onto the wet grass, puddles and mud-soaked grass.

There were only 4 staff there faced with a horde of angry people waiting for their bags. Despite their attempts to check tags before issusing bags, there are limits to what they handle- Bags which were uncollected upon calling their number (one by one) are placed on the ground pile (which many were also left lying around unattended). Everybody was searching and rampaging through the pile like searchng for lost treasure in the ground, anybody could have taken any bag they wanted.

Goodie Bag Collection
This has to be the highlight of the event and just re-literate the point that if queuing is up as an olympic sport, Singapore would not only be champions, but so for consecutive years to come. Unlike last year’s race with dedicated individal queues for all shirt sizes, the queue this year is all lumped into one – both for competive and fun runners. Also as known, there is a shortage of goodie bags for the ladies due to the inablity to meet last minute surge in registrations.

Moreover, due to the organiser’s inablity to meet up with last minute surge in registrations, non-competitive runners are given a very varied mix of Mizuno attires, ranging from older dry-fit singlets to cotton T-shirts. Unlike that stated in the event brochure.

Overall: 2/5
Verdict: Worst Wave Run I’ve ran in ages. Ok if it’s already muddy and wet, just don’t give us the need to run with compasses and let us have our bags – Both of them! 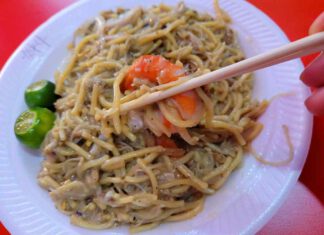