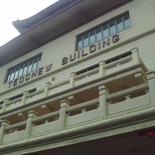 It’s the Teochew building anyway. At the interview panel, I was posed with a first question in Chinese which I understood, but had a hard time answering considering that I am not too proficient in the language. Whats more they are like speaking with a strong ascent which I could not fully comprehend. So I asked myself from the start continue in Chinese and struggle on the interview? or should I speak in English so I can better express myself and “sell myself” better with the content I’ve prepared – In English!. I went with the latter and the panel replied in English… whew!

But speaking in English technically placed one of the elder panel members out of the picture who only seem to comprehend Chinese – WRONG MOVE. Then the elder panel asked me a rather basic question in Chinese “I am Teochew right?” I didn’t not understand him and replied “Not sure”- Major SCREW-UP – It’s not because I do not know my identity but I don’t know what he was asking! Wahhhh! If I know I could have instantly replied YES!

I was “cool” with the other panel who asked English questions such as what I intend to do over the 5 years, plans, etc. Guessed I did well on the academics, CCA and leadership part. But I think I seriously set myself down with the stumbling block on the Identity part – which I believe is the main pride of the association, besides the other main pillars.