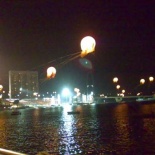 The main bay grandstand is packed with primary school childen tonight and so was the public surrounding area round the esplanade bridge. The show ended with a rather conservatively short 10mins fireworks display with a myriad of different firing and exploding styles. Hung out at Boat quay for the rest of the night, where the place later was swarming with primary school children thereafter heading home to board their school buses parked nearby. The goodie bag this year looks kinda cool, it’s like an imitation version of the popular Crumpler sling bag.

I guess we all got so acustomised after watching so many fireworks numerous times a year (CNY, NDP, Christmas, New Year), I find that it’s harder to wow people in Singapore with fireworks now.