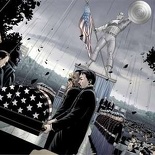 After 66 years of battling villains from Adolf Hitler to the Red Skull, the red, white and blue leader of the Avengers was felled by an assassin’s bullet on the steps of a New York federal courthouse.

Captain America was headed to court after refusing to sign the government’s Superhero Registration Act, a move that would have revealed his true identity. A sniper who fired from a rooftop was captured as police and Captain America’s military escort were left to cope with chaos in the streets.

But the sniper didn’t act alone, and didn’t even fire the shot that killed the captain…

Why did Marvel Comics kill off the patriotic superhero? Writer Jeph Loeb has been busy working through the stages of grief in his most recent titles. A book centered on Wolverine dealt with denial; one with the Avengers covered anger; and Spider-Man battled depression.

With the story line so relevant to present-day politics, and the timing of the latest issue so precise, it’s hard not to think the whole thing is one big slam on the government.

Since then, Marvel Entertainment Inc., has sold more than 200 million copies of Captain America magazine in 75 countries.

In the most recent story line, he became involved in a superhero “civil war,” taking up sides against Iron Man in the registration controversy, climaxed by his arrest and assassination.

Marvel says you never know what will happen. He may make it back from the dead after all, although Loeb says that question isn’t really important right now.