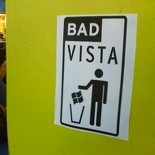 Besides those freaky monster recycling bins the Environment Club had sprouting all around campus, noticeably are some posters stuck around the grounds as well, particularly going against a certain operating system which calls itself similarly like 2 hinged apparatus which you can open and close for ventilation in your home. Take that ownage!

Oh yea, on that as well, completed the C&C 3 Tiberium Wars GDI Campaign round Tuesday. I replayed the whole campaign on hard difficulty after I got bored playing it halfway on normal. It’s just unlike the old C&C days, everything is all Noob friendly now, but hard is actually now that hard either too.

Would be clearing the NOD campaign by this week. And yes there is homework to do now too.