This the first time the title sponsor, Mizuno is organizing such a run under the “Mizuno Run” name, contrary to those other low key Mount Faber races held over the past years, this is actually nothing new as claimed by many runners I know, well at least now I know!

I had not ran this race route before, neither was I very well updated on the route which I always frequent when I was very much younger. So I was pretty much “blur” as anyone else who was running it. The run saw ourselves making route from Henderson road up towards the industrial distripark, across the AYE towards Pasir Panjang road, then turning up the hill from Pender Road. Most of the race is fast paced (and especially crowded at the start) which interesting slowed to a steady crawl when scaling the hill itself – where everything all seemed to go at slow motion – really! The route covered all the highlights of the run which involves the route through Mount Faber landmarks such as the cable car station and comm tower.

Just as all which goes up, must come down – the route down was speedingly spectacular and the first time I’ve ever raced down a route so fast my legs couldn’t cycle any faster. We crossed CHIJ at Bukit Purmei towards my all familiar Tiong Bahru park – Delta House before circling Gan Eng Seng School and back up to Henderson road for the finish. Finished the race in about 55mins, which is not exactly spectacular for a 10km hill route, but at least I kept it within my target hour. Met SGrunners, TLR, Bee, Sotong, IMD & Brokie before and after the race, but missed their photo taking session lol, at least we have our own too: 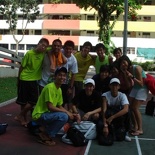 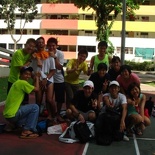 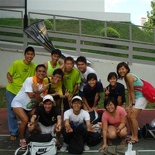 It’s unreal having a race so close to home, races which I always take part are like long MRT or bus trips away. But this time, everything is all within close walking proximity – I can even warm up walking to the venue after breakfast at Redhill Market. But I guess those who really own all are those who just live right next to the venue – where some of us saw simply taking the lift up to their homes after the event – owned!

Good thing some parts of the race actually cover the very routes I run every week, only this time we get to run on the roads themselves! Couldn’t join the track team for lunch at VivoCity, as I had lots of chores to finish up at home, but that didn’t stop me from going for my 1 hour recovery swim thereafter.

Some noteable running snippets – running around my estate last is exceptionally enjoyable now – it had been a long time to now where I can finally run for 17km+ at ago with steady nose breathing and not much of a pant. Heart Rate 120bpm – 174bpm.

About 1/3 into the year with more than 1/3 of the targeted millage of 1000km for year 2007. Actually I was intending to retire my My DS Trainer 11 after last March’s Ambank KL Marathon, having clocked about 700km since then. Strangely, cushioning is still rather effective, so I guess I can put my new shoe purchase on hold. Some say it’s my rather conservative running style (no dragging, proper foot landings and no stamping) which prolongs the life of the shoe which I only wear it out for runs and it still feels much better than my other SAF Brooks training shoe with hardly 400km under it’s belt.

Interestingly it’s always Nike and Reebok shoes which always fail within a year by sole tear, my Asics shoes can be used till it’s so worn out theres no rubber between the cushion and the ground. do live up to its name having the best consumer running shoes on the planet.

Would be giving the Bedok Reservoir run a miss this year.