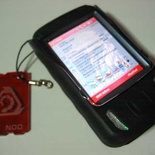 After going through about half of the GDI campaign, C&C 3 is nice to play with a very low learning curve in reference to the old C&C Tiberium related wars series. The SAGE engine is really kinda cool with lots of new eye candies. SAGE is not new to those especially when it first appeared in Emperor of Dune and C&C renegade almost 5 over years ago. Otherwise one can recognize it as a souped up C&C Generals. The thing which disappoints is largely the difficulty of the game play, it’s too easy now – ever since Tiberian Sun, the game at normal difficulty is simply just too darned easy, nothing like the ol’ days involving sneaking your MCV past a rampaging NOD base or making every hitpoint on that very large turret protecting your base count. It’s just too newbie friendly now. I guess the focus is now on graphics and online PVP battle, where it can feed the desire for challenge from any one of us. For me, I am just only obsessed into completing and covering this sequel campaign story. Look I’ve even Nod-dified my phone with a cool new silicon case and Nod doc-tag from my Kane edition pack – now thats a mean rw6828!

Gameplay is rather slow for my on 1920×1200 on high resolution, guess my old Ti4600 is coughing hard on the renders. Currently on 1280×900, medium for bareable play. Would love to see 1920×1200 on ultra high visual settings though. On upgrade plans, would be looking forward into upgrading my current Pentium 4 B workstation to an intel Quadcore Kensfield Q6600/6700 + 2GB DRR800 RAM + Geforce 8800 GTS + additional 500GB SATA Harddisk with Vista Ultimate. Won’t be seeing myself getting another replacement motherboard if this one fails again. I guess it’s time I stepped out of AGP8x and DDR333 era into something more breather-able and sustainable in the near future.

Running
And now onto running, here is the basic route I’ve been running for the last month. If you can follow the faint yellow lines on the resized image it starts from the bridge where the old RP/crescent girls/Tanglin Regency Condo is all the way to Rivervalley, down to Tiong Barhu park, Redhill MRT, Delta Sports Complex, then along the canal route back up again for one full loop: 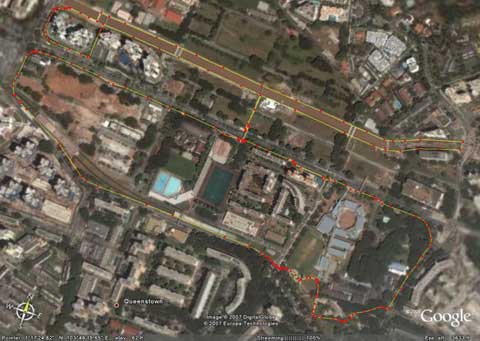 One round is 5.67km, usually I do 3x5km rounds or 2x(6km-7km) modified/extended rounds depending on time, as it’s usually nightfall and late by the time I am back from my work place.

Would be doing up a new section on the site called “running spots in central/southern Singapore, it will cover all my favorite running spots including Sunset way and Labrador park as well. Now if I can find time to get that up soon…