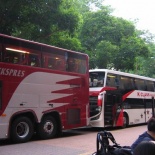 Day One, Saturday 17th March. It’s all dark and anticipative upon waking up. Met up with Elrick 7am at Golden Mile, Derrick, Val and Ruth are already up in KL on an overnight bus, so we will be meeting them up later in the day. It was a bonus when we were told that our standard VIP had been upgraded to a VVIP coach with leather massage chairs and personal movie entertainment screens for free. Not that I actually needed those as I intended to actually sleep the whole journey up to KL, on-ride DVD movies were rather choppy and the massage chairs isn’t the perfect definition of comfort- though there are several modes available, they are all about the same and makes funny groaning noises when activated, it’s like sitting on a large vibrating handphone! Nevertheless had breakfast II (breakfast I was at home by Dad) at Yong Tong bug stopover and lunch (AhYat Timsum, as dragged to by Elrick) upon checking in at our Hotel (Swiss garden hotel) after a 4 1/2 hour bus journey.

Thereafter we made our way to Wisma OCM which was just around the blocks to collect our race packs. Amazingly registrations are still open! (duh) nevertheless weren’t told of the 20RM deposit we had to make for our race chip and the event shirt is COTTON! bhhawrr! man do it look horrible! nevertheless theres a small sports exhibition and promoters for Addias, Powerbar (where Elrick met his GRC rep, who was rather popular there) and even the upcoming Penang bridge Marathon.

Dropped by Merdeka Square (aka the padang) after a short 30mins walk from Wisma through Chinatown. That is where I came to realise how small the City was as opposed to my previous visits. I remembered taking a monorail from Berjaya and 2 stops to get to Chinatown, little do I know that’s an excessive big loop when I can actually get to my destination from my hotel after a short route planning on the city map. 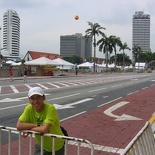 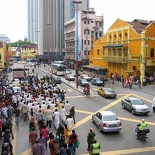 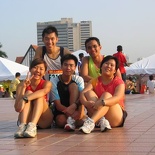 We were greeted by vast open fields and the tall flag pole bearing the Malaysia flag at Merdeka square. Interesting, though it’s like 12hours to event time, the start point was not even set up! Not to mention few half set up tents here and there. After all I think it’s gonna be a small event, so not much pre-preps are actually required as compared to SCM, but hey both are international marathon events too right? Did some shopping (and lots of walking) for the rest of the day around the area till late afternoon, where we linked up with Derrick and Gang for dinner at Tong Ren Tang Restaurant along Jalan Alor Street, which is a rather popular night eating hangout. Shopped around Jana Bukit Bintang and Imbi before heading back to the hotel to retire for the night around 9pm.

Day One, Sunday 18th March. Hotel wake up call 4:45am, but woke up at 4:30am from my PDA alarm, then it’s a quick change in sleepy mode into running attire and breakfast from some kaya bread we stocked up yesterday. KL city is very dark and quiet around 5am, with regular crowds nucleated around the late night coffee shops, otherwise it’s nice, cooling and non of the polluting day time traffic- perfect for a half-marathon.

The Race. The race was flagged off my the KL mayor soon after I am seeing myself pacing myself along the KL highways for the first 10km of the run which is rather hilly I guess, though the smooth highway the roads are always going up and down, always good on the way down but demanding the uphill at the later parts of the race where fatigue starts to kick in. Otherwise, the hills are a good place for overtaking, up (people slow down/walk on up) or down (most don’t open up steps down) too. The crowds generally eased from 5km onwards where the first water point is located, from there ou can always see an open space for you to run ahead. It’s after the Airport-tollbooth where the Sun rose and temperature starts rising, that’s also when most of us start to make our way into the heart of the KL shopping district and City (Jalan Bukity Bintang) running pass familiar shopping locations. 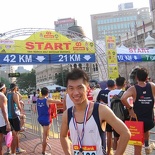 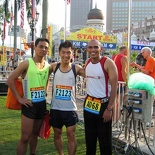 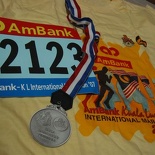 I remembered one point where the 10km runners merged with us half and full marathoners, then an Indian kid asked me how much more to run? haha I can only reply “maybe 5-7km? why not ask the people at the next water point?” Considering the only distance marker I saw was at the 10km mark! Man I could not pace myself well at all! One confusing part involves running loops round the last few kms before finishing at the padang. Was told Elrick ran like 3-4 rounds as he did not get the lap ribbon on one lap, lol. All I can say, after 15-18km, seeing the familar flag tall landmark flag pole at the Merdeka square can really put the power back in your speed to sprint the last few Kilometers to finish the race.

Finished the race in 2.05 Guntime and 2.04 Nettime, a new overseas record and faster than my last year’s Sheares Bridge Run timing. Good thing there is always water and 100-plus at every water point, not to mention medics, though this meets the international requirements, it would be better to have more points and even mobile toilets stationed there (alot of runners can be seen running in and out of the side bushes during the run).

More commendable points includes fast baggage collection, which took less than a minute to retrieve my depostited shoe bag, very impressive indeed. Baggage security was decent but not overly protective, otherwise it still gets the job done. The only thing I have against it is the stapling of the tags to our bags – it would be better to have a detachable tag to cable tie to the bags, rather than stitching your bag with 2-3 staple bullets to hold the tag in place. Also, it would be un-wise to hand a baggage collection receipt to runners written in markers which could possibly smudge in sweat, considering the runners have to actually run with it. Alternatively, runners can use their number tags (Bibs) to collect the baggage, that would be better, since the receipt only contains that.

Met up with Derrick and gang and even the SGrunners (esp TLR and this family) for post race gathering and photos before pigging out at our Hotel’s international buffet breakfast- yummy! It’s like we had not ran 21km at all- we walked back to Bukit Bintang after washing and checking out at 12noon for more last minute shopping (aka part II) till 3pm, where we collected out bags back at the hotel from our rather hospitable and very friendly hotel bellboy.

The bus trip back to our surprise is on another what they call a “deluxe VVIP coach”, I remembered the lady in Konsortum saying, the bus back may be different, together with some nightmare stories as told by friends about bus companies normally con-ning customers with old dinky buses on their return trip. Guess we can set those fears aside on our trip back. Reached home about 10pm (not much of a jam at Tuas checkpoint despite school holiday’s sunday) and went out for family supper thereafter.

Didn’t take much photos, but you can view more of the event in the photo album.