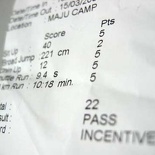 Remember my last Tuesday’s IPPT which was void due to rain? After a hassle and rush to clear my window before my birthday, today is rematch day and my 2nd IPPT in 3 days.

Reached Maju Camp with an overcast sky and strong winds, even the sound of distant thunder prompted cheers among the RPs (who are seemingly delighted with the approaching rain). To my dismay, it’s like deja-vu all over again. Thing didn’t get better either during briefing with strong winds & constant thunder, before the static stations started, the heavens leaked.

My legs were still aching from last Tuesday’s IPPT, which particularly hindered me alot on today’s standing board jump – with large diminishing returns on every new jump. In short here are my result for all 5 stations:

😥 So thats a 22/25 point PASS wahh! Yes I know, my standing board jump (SBJ) is a great giveaway. Actually I got 234cm on my first attempt but I threw myself so forward I fell back, watching my 234 change to 180 on the screen in a second. The first one is given a fault by the PTI so I got 2 more tries. My 2nd try was at 225cm but the same with me falling back. My third (and last try) was a disappointing 221cm and it could not get any better. If only I quickly curled myself forward on my 1st jump to maintain my 234cm (4 points).

I remembered hearing someone quoted this before but dunno from who:

“It’s just us runners, we run too much, we forgot how to jump…”

Following on Dad’s told me few days ago – I should learn be satisfied with what I have, considering that I’ve not taken IPPT for almost close to 2 years, so I reluctantly left the static stations with 221cm for my SBJ. The rain stopped after our static stations, which came as a cool welcome doing the 3x800m laps round the camp which is rather pleasant to run I say, very very much beats running laps on the track – my recommendations if you want a good 2.4km route for your IPPT. I believe I could get better timings than 10:18mins if my mind won’t so clouded with disappointment then about my SBJ distance. There’s RT going on too during my 2.4km, can see the look on the races of the non-ICT RT personnel when they see us finish the 2.4km with glee – ENVY!

Got a pass with incentive in the end, so thats $100 excluding make up pay, which is about $10 for specialists. Come to think about it, $100 is the same amount I get for silver during my active days.

😀 Cheers to Jarrod whom I met similarly on last Tuesday’s IPPT as well, he’s around today and cleared his window (which closes earlier than me on this coming sunday) as well too! He’s from the 1981 batch and a teacher teaching GP and philosophy in RJC. Haha thanks for the cab ferry to Clementi thereafter too!

😈 In closing, I always have a stand that Standing board jump is largely based on technique, and not largely dependent on strength, there are freaking long legged people who jump only 206cm and small short nibble ones who can easily do 250cm without a sweat. I won’t be taking another IPPT too soon, allowing this 2006 window to close next week with just an incentive ($100). Coming April, I will look into critically improving my SBJ and shaving that 30 seconds off my 2.4km for a <9.44mins for a safe CAT X Gold. I will tackle my 2007 window with at least 240cm for my Standing Board Jump with bi-weekly jumps from now on during my weekly runs.

The best way to face your fears, is to do so head on…