It’s 2007 a new running year and new resolutions to meet as well. With that, it’s time to revise the 2006 usual running patterns. 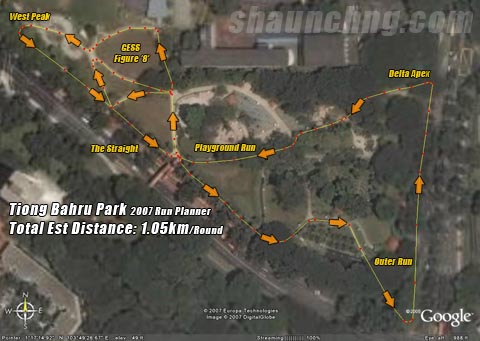 My usual favorite bi-weekly running route will have a revised distance, so not only make my lap and distance counts easier but it will be more accurate to do my timings and pacings based on the single kilometer instead of the 800m previously. One round is realistically 1.05km with an additional 50m to accommodate for my habit to occasionally take the insides of corners and bends, so give and take it’s 1km.

I though I might be crazy naming the corners of the run, like the “Delta Apex”, or the “GESS Figure 8”, but unlike that on the BBC Top Gear race track, it’s the basic thing I can have on my mind (besides playing music) for those extended repeated rounds I particularly love. Training runs will be 15 rounds for half-marathon training (present distance for my Amback KL Half-Marathon) and 20-30 rounds for a marathon (2007 SCM).

My Labrador Park Distance will still be fixed at 1.22km so is my other favorite Sunset way canal route capped at 5.18km per round. 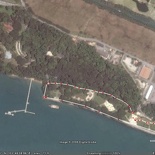 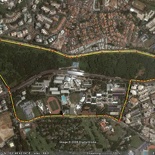 National Vertical Marathon 2007
Got a confirmation on the National Vertical Marathon 2007 this Sunday. This time it’s Republic Plaza (RP) with 60 floors to beat. I had not ran up RP before, contrary to Swissotel and Suntec, hope the stairwell layout is alternating and not so monotonous. Registrations starts at 6.30 – 9am for Men’s Open. Would be meeting my track and classmates at Raffles MRT at about 7am after breakfast around home. Then would be going for a short 1 hour continuous cardio swim after the event to sum up the coming Sunday morning.

Asics DS Trainer
I was looking the Asics DS Trainer 12 is out for $209 at the Marina Square Asics concept shop yesterday. Should be able to get it at about $129 from the running world warehouse. Otherwise, I still find my present Trainer 11 the best looking so far, which simply justify why the DS trainer 11 and 12 are sold for the same $209 price?

Last but not least, here is a little inspiration: Running The Sahara.

Would be going out for another 15km run again. Chaos!