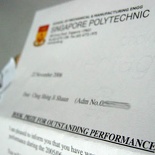 I’ve always longed for some sort of “monetary award” one can always get from being just the plain top few in class. Not that I’ve ever been the top few in class but it’s definitely something to look forward to when you know you are doing well and not too hot headed about it. Moreover, I’ve applied for several bond-free scholarships in the SAA for the last 2 consecutive years hopefully to get some aid my Semester school fees, but always got rejected. So it’s like – unless you get get something better than 23 As & ADs in 3 Semesters, you are kinda out of luck. Till I discovered it had been only a bursary all along… which I can’t even qualify, either. Damn.

Then, my class tutor, Mrs Lim passed me this plain brown letter in tutorial class today. Besides the self-addressed stamp to the MM office printed at the rear, it’s plainly attached with a paperclip a slip with instructions to “please pass this letter to your student”. Inside that is a 3 fold, single slip letter which reads:

“I am pleased to inform you that you have won a book prize for your outstanding performance during the 2005/2006 session.”

“You will be receiving the book prize during the MM Final Year Student Assembly, which will be held on Wednesday, 13 December 2006 at SP Convention Centre…”

Following on are reporting details and invitation for a reception thereafter. The other interesting thing is that the presentation will be conducted concurrently with the 3rd year student prize presentation as well.

I was told before that students who perform well in a particular year will get some kind of a monetary award or so, I didn’t for my first year, but it seems this one is coming from 2 years 2005/2006, so am I supposed to Ummm get another as my name appeared on the honour row 2 times?

Mind me being naive, but the question in doubt now is what kind of prize will I actually be receiving? Because the word “Book Prize” can be rather ambiguous and I do not want to speculate so much at this point in time. So can it be at least $500 in cash? a $10 wooden plaque? or worst, a printed certificate?