For something new in gaming, thinking of buying a Nintendo Wii for a change, why? For starters, I usually don’t console game & all I had previously was a NES, a SEGA Gamegear & Gameboy SP. Therefore, I usually see my chances at modern console gaming at friend’s houses or chalets. But not much of a problem actually as I’ve always never partonised consoles & had a stand that console graphics will never even be up on par with PC games, though running on similar PC based hardware. In other words, they are inferior to PCs. PC had always been my chosen gaming platform for roughly the last one & half decade. Moreover, some console games are just not meant to be played with analog controls & best on PC, like RTS & FPS games for instance. 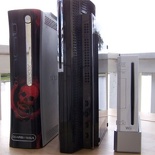 I guess I’ve out grown the Playstation (particularly the new 3). Moreover it’s too common and overhyped, let be the Xbox & the 360. Anyone can call themselves a gamer now, the name is just too overused… just as how any broke who registers a business can be labelled as an ” entrepreneur”. Seemingly, even pioneers like us have nothing much to brag about though. Been “Gamers” long before windows 3.11 while single digit bit-gaming DOS era still existed. But that’s nothing to be proud of now, and nothing much the playstation generation care of either now, just as how they treat their biological elders. We are just any “gamer” like the pesky 8 year old kid next door or one hogging the arcade game machine with 29 credits pre-loaded into the game.

At this fresh crossroads of choosing one of the 3 forks in console gaming, the Wii seems to be the most innovative and interesting input platform. But then console games are not cheap either. The Playstation selling point is arguably having the largest console game base. But the Xbox had grown remarkably as a new bird in the industry with respectable specs to boost, coupled with several outstanding titles including ported arcade ones to date. The interesting thing is while Sony & Microsoft stuck to their guns, Nintendo’s new gyro console platform, though in the infant stages, is the most promising on what such an input gaming style may bring about in the near future. Therefore with me leaning more in that direction.