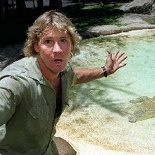 CAIRNS, Australia – Steve Irwin, the hugely popular Australian television personality and conservationist known as the “Crocodile Hunter,” was killed Monday killed in a freak accident in Cairns, police sources said. It appeared that he was killed by a sting-ray barb that went through his chest, Queensland Police Inspector Russell Rhodes said. He was swimming off the Low Isles at Port Douglas filming an underwater documentary and that’s when it occurred.

In Memory of Steve Irwin 🙁 man.. I really loved his old crocodile hunter shows during my growing up years always conquering the baddest of crocs. Better watch out for stingrays man, being a Scuba Diver myself.