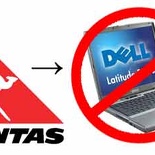 New Qantas regulations make it clear that no Dell laptops, not even those unaffected by the battery recall, are allowed to contain batteries while on the plane. That means nada usage while your fellow flightmate beside you happily go tippy-tappy on their Vaio with the same defective battery.

Apparently as we all know, the Dell batteries that were recalled were all Sony manufactured batteries between specific manufacturing dates. Sparking not only the greatest cheers & party poppin’ from HP & Gateway, but also Dell’s record setting biggest recall of 4.1 million laptop batteries worldwide. But Dell is not the only other company to use these batteries, Dell also uses at least 2 other non-Sony suppliers for their line of notebooks. 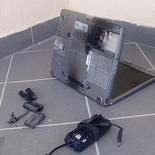 While Sony gets their own fair share of flames from their own medicine recently, the defective batteries are almost everywhere & not only arrowed on Dell. Cool Sony, you gave the world the walkman, now dual usage laptops which can also serve as BBQ fuel. What could be coole- umm… hotter?

But Qantas are blind just to ban Dells, or to even consider it. The FAA has evidence that if it does go up in flames, it will not bring down the plane & neither has plans to Ground Laptops. Well unless you are deliberately starting a 30 USB port BBQ, or the sudden interest of laptops by middle east men.

I do not own a Dell notebook, but this form of technological discrimination does not look good & will definitely lead us to nowhere. Well one can always print one of those Gateway or HP stickers & just smack them over the Dell logos, airport staff can’t tell the difference anyway, neither the difference between a salad & dessert fork.