The Newbalance realrun was on yesterday (Bib no. MO1959). In the mist of all the sunburn we’ve got from the sea water, tanning oil & a good sunny weather. Now all red like overcooked lobster… Yea, but it was cool, literally… 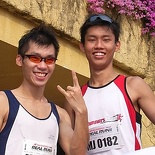 This year’s crowd was smaller than last year’s (presumably because of Sheares Bridge run 2006 next week), with the opens crowd not even up to the gatecarpark entrance (the slope with cars parked leading to the merlion behind the start line), as opposed to last year’s crowd. But nevertheless a respectable crowd is still there which resulted in a very slow start. It took like 3.3mins after the horn to actually cross the start line! wah next time start in front lol. The start is where its packed the most especially the satellite circle & I was really delayed off my usual running pace at the 4km mark – too many people & very difficult to overtake. Nevertheless, I really appreciate water points, not for drinking but crowd control as everybody rush to the sides for water, there will always be a nice center clear path for me to speed up catch up with my pacing. 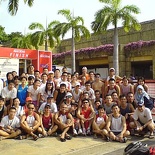 Besides relying on pure power to overtake on uphills, the other overtaking spree is always at the sand part, which always seem to have an immediate mental effect on runners (I remembered seeing a runner immediately started walking the moment she touches the first grain of sand, like magic?). For me its my wildcard, generally, keep running & take small but constant strides & you can go quite fast on the loose sand. Strangely the sand part this year do not feel like 1.6km, maybe around 1.0-1.2km. Or maybe it just felt different due to a diversion of the usual route.

The trail part is still the same, fast shady dash to the finish with the all usual kids in the forest cheering ya on with distances left “too short” to be true.

Missed The Sgrunners event anniversary photo taking together with samuel & trackz when we went to take our barang barang… Dang should have informed TLR instead of reno or our absence.

Interesting events during the run:

Quote from brokenrunner:
“….i didn’t see any fainting ones. this shit-in-the-pants guy really made an impression. i didn’t see his face. but i can forever remember his back view…. brown in colour. …”

Yes, this year’s run seem to be rather ‘stinky’, mainly because of a runner who soiled his pants when running! You can detect his faint distinctive presence at many points around the run, but nothing can beat what brokie & me encountered at the siloso beach area, round the 7-8km mark:

A Chinese guy with white singlet top, commendably running at a relatively fast pace in that condition too, with brown stained stuff seeping though his white running top & some umm brown stuff dripping down his leg. You definitely can’t miss the sight, with the ever choking natural smell with always seem to be following you. Haha you can see a very large 5x3m gap behind him sia, very very funny. but still yucky… Which proved to be a very good motivational factor to overtake him & never let him OVERTAKE you again!

Post Race:
Hung out post race at siloso beach to chill out, played a little volleyball, despite being very rusty after one year from the sport. Otherwise there is frisbee. Heard the sgrunners are chlling out at tanjong beach, which is the other end of Sentosa, so didn’t join them in the end. Missed out on soccer & basket-football as I was too tried after the run to play. Nevertheless, the monkey’s ball game in the water proved to be one of the few group cohesive games, not to mention a not too physically demanding game for lazy bums like me.

Pohlong aka Alson came down midway during the day, who is ostracized most of the time. Haha, but the some of us did mentioned not being too hard on him as its just his nature haha, so as some get to know of him though his seemingly “open nature”. He actually wanted to chat, so found some time to have nice leisure talk with him at the end of the day where I got to know him better. Turns out hes like one of the few “fallen angels” as well, out of JC & into poly. Then we chatted about school & stuffs, with Yuan & Cockroach. Generally everyone judges a book by its cover, so don’t be too deceptive as it seems, he’s not that bad as it seems when you get to know him in person. Nevertheless he is still the only one with a free seat beside him on the crowded bus back.. 🙄

Oh yea, you can request a cert of the event through the online login page, which do not seem to be working either.